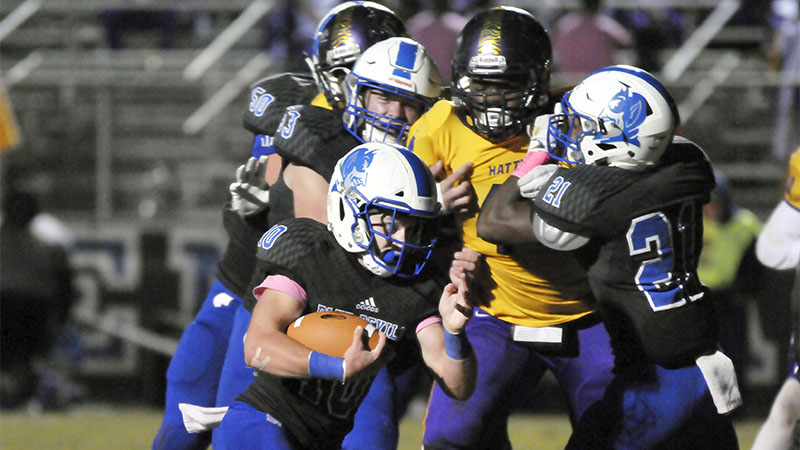 Jonathan Mitchell | Picayune Item Around the corner: Running back Ronald Murray takes a handoff outside as running back Detrich Spikes and guard Chandler Holifield seal the edge.

PRC once again almost completed a second half comeback, but fell short with the Hattiesburg Tigers emerging victorious 35-25.

The game started with both defenses playing aggressive football, which prevented either offense from getting any rhythm.

There wasn’t any scoring by either team in the first quarter, but that would change very quickly at the start of the second.

PRC was driving deep into the Tigers’ territory before a fumbled snap stalled the drive.

Kicker Sam Lambert came on the field and drilled a 32-yard field goal to put the first points on the board and give PRC a 3-0 lead with 11:05 left in the second quarter.

Hattiesburg returned the ensuing kickoff to their own 31, and on the first offensive play of the possession quarterback Jordan Willis took a quarterback keeper down the sideline for a 69-yard touchdown run.

The extra point attempt by Kendyl Terrell was good, and the Tigers took the lead 7-3.

A quick three and out by the Blue Devils saw the Tigers have the ball at their own 26-yard line.

A few big plays later, the Tigers saw themselves at the Blue Devils’ 3-yard line with four downs to score.

They would do just that with running back Rhyen Briscoe taking the ball in from four yards out.

The PAT was good and Hattiesburg now led 14-3 with just over six minutes left in the second quarter.

PRC got the ball and drove into Tiger territory before stalling at the 41-yard line.

Head Coach Jacob Owen elected to go for it and sent out the team’s goal line package.

Wing back Kevin Wilcox took the handoff, but was unable to get the three yards necessary to pick up the first down, and the Blue Devils turned the ball over on downs.

Hattiesburg would take advantage of the momentum shift, and they started driving down the field.

Big runs gashed PRC’s defense, and Briscoe would score again on a run from 15 yards out.

Another extra point try by Terrrell was good and the Tigers were up 21-3 with only 52 seconds left in the first half.

Hattiesburg received the opening kickoff of the third quarter, and had good starting field position on the 50-yard line.

Two plays in to the drive Briscoe was able to find a hole in the Blue Devils’ defense and burst through the line, taking it 42 yards for a touchdown.

Terrell was once again good, and the score was 28-3.

Now it was comeback time for PRC.

The Blue Devils started with good field position on the Tigers’ 41-yard line.

PRC pounded the ball on the ground with the offensive line creating some big holes for running backs Detrich Spikes, Ty Herring, and Ronald Murray.

After only a few plays the Blue Devils were at the Tigers’ 2-yard line and Owen once again sent out the big guns for a goal line formation.

Clay Spiers, who normally plays linebacker for the Blue Devils, took the handoff and powered his way up the middle for a touchdown.

Owen decided to go for a two-point conversion, and it worked as Murray took a handoff outside and waltzed into the end zone to close the gap.

PRC was trailing by 17 with still over half of the third quarter to play.

The Blue Devils’ defense held firm, and forced a quick three and out to give the ball back to the offense.

Quarterback Cameron Brunson connected with wide receiver Ryan Neil to start the drive and moved the ball to the Hattiesburg 40-yard line.

Eleven plays later the Blue Devils were in a fourth and goal situation on the Hattiesburg 3-yard line.

PRC needed a score, and Murray answered the call with a run up the middle for another touchdown.

The PAT was good and the score was 28-18 with one second left in the third quarter.

The teams traded possessions running the clock down to six minutes when Hattiesburg would score a crucial touchdown.

Briscoe once again was able to find a seam, and the running back ran the ball in from the PRC 25-yard line to give the Tigers a 35-18 lead.

PRC would respond with a scoring drive of their own, which was capped by a Herring touchdown run to make the score 35-25.

After the extra point it was time for PRC to attempt an onside kick in hopes of regaining possession with only 1:35 left in the game.

The kick was good, but would eventually be recovered by the Tigers.

Hattiesburg would run the clock down before punting the ball and pinning PRC inside the team’s own 5-yard line with only a few seconds left in the game.

The Blue Devils tried a hook and ladder play, but the Tigers weren’t deceived and the tackle saw the clock run out.

Owen said he was proud of his offensive line’s performance, but said he needed to start making offensive adjustments earlier in the game.

“I’ve got to put the offense in a position to succeed, and my play calling in the first half didn’t do that,” Owen said.

The Blue Devils’ next game will be away at the Picayune Maroon Tide on Oct. 25 with kickoff set for 7 p.m.

Poplarville basketball going back to basics