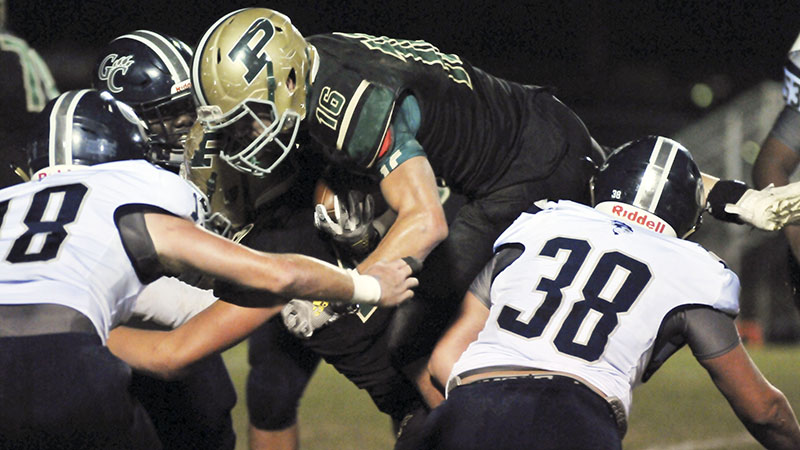 Running back Gregg Swann hurdles a Greene County defender before getting tackled. Photo by Jonathan Mitchell

In a game that would decide the district between the Poplarville Hornets and Greene County Wildcats, Poplarville fell 26-7.

The game was close during the first half, but the Wildcats were able to find some rhythm offensively in the second half and pull away from Poplarville.

The first quarter was a defensive stalemate with both teams flying around the field as the offenses struggled to get anything going.

The teams traded possessions until 51 seconds were left in the first quarter when a team got on the board.

Greene County got the ball on their own 31, and after a big play from running back Anthony Calhoun, quarterback Drake Henderson sprinted up the middle to the end zone on a 40 yard touchdown run.

The extra point was no good, and the Wildcats had a 6-0 lead.

Poplarville answered with a score of their own on the next possession.

A 10-play drive ended with a touchdown run from running back Ethan Taylor from 15 yards out.

Kicker Zach Carpenter came on for the extra point, and his kick sailed through the uprights to give Poplarville a 7-6 lead with 8:50 left in the second quarter.

Taylor’s run and Carpenter’s PAT resulted in the only points scored by the Hornets.

Both defenses tightened up after yielding the scores, and the two teams went into halftime with the Hornets leading 7-6.

Greene County received the opening kickoff of the second half, and drove from their own 39-yard line into the red zone.

Running back K.J. Miller took the ball in from nine yards out, and this time kicker Jacob Mitchell sent the ball through the uprights.

The Wildcats led 13-7 with 9:02 left in the third quarter, and now it was time once again for the Hornets offense to answer.

Poplarville’s offense struggled to get anything going against a talented Wildcat defense, but there was a momentum shift when cornerback Jordan Bolton intercepted Henderson to give Poplarville the ball at their own 40.

However, the Hornets weren’t able to take advantage of the turnover, and went three and out.

The game was still within reach for the Hornets as the defense continued its stellar play behind defensive tackle Chandler Norris and defensive end Khalid Moore.

Halfway through the fourth quarter Greene County had the ball at its own 33-yard line.

The ball was snapped, and Henderson once again found a hole right through the heart of the defense.

No Poplarville player would catch the quarterback as he sprinted in for a 67-yard touchdown.

Poplarville needed to score, and quickly.

Running back Chase Shears was able to generate one first down for the Hornets’ offense on the next possession, but after an incompletion from quarterback Blaise Breerwood and two runs that went for negative yards, Poplarville had to punt.

Greene County got the ball at their own 43 after a punt from Trae Wilson, and had their eyes set on running the clock down.

That’s exactly what the Wildcats’ offense would do, and 57-yard drive ended with Calhoun finding the end zone again to ice the game.

Poplaville would receive the kickoff and run one play before time ran out, and Greene County clinched the district championship with the win.

After the game Head Coach Jay Beech took the blame for the team’s offensive struggles.

The Hornets will now be a number two seed heading into the playoffs in a couple weeks, and Beech reminded his players there have been plenty of second seed teams who have won the state championship.

“They have a great defense, and a good offense as well. They just played better than us, especially in the second half,” Beech said.

The Hornets will need to shake off the loss as the players begin preparing for their final game of the regular season against Sumrall.