Poplarville Board of Aldermen ask officer to resign 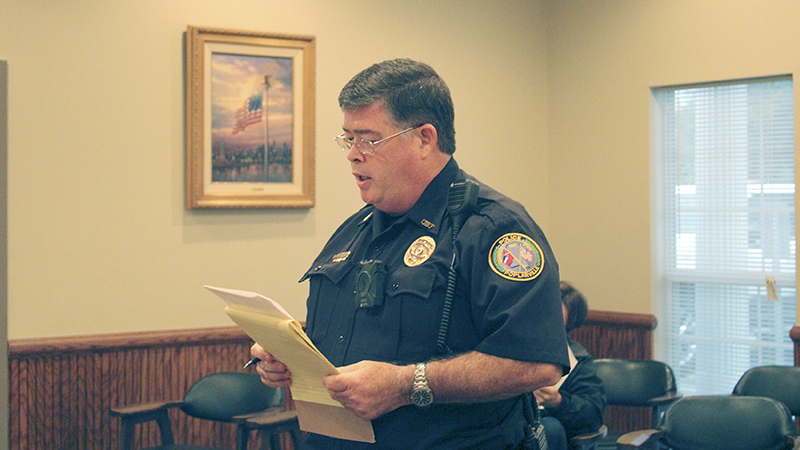 Poplarville Police Chief Greg Hartley speaks to Poplarville’s Board of Aldermen during Tuesday’s meeting. After executive sessions held Tuesday evening and Thursday morning, the Board approved a motion to ask an unnamed officer to step down or be fired for unknown reasons.

The Poplarville Board of Aldermen held a special session Thursday to discuss personnel matters in the police department.

After holding the executive session, the Board unanimously voted to terminate a police officer or give him the opportunity to resign, said Mayor Rossie Creel.

Creel said there are no additional details concerning the Board’s decision that he can share, because they are personnel issues.

Creel said he has no concerns about the police department as a whole, and he has complete faith in everyone at the department.

“Our police department’s in a rebuilding process, and we are trying to build the most professional department we can that can provide top notch services to our citizens. That’s what we’re after,” said Creel.

“Ordinarily we don’t have a lot of turnover, but in the world of law enforcement these days, we have trouble getting good qualified police officers on staff,” Creel said.

Police services are not interrupted and will not be interrupted due to these circumstances, Creel said.

“We will continue to provide full coverage throughout the city and [the public] can have confidence that they’re going to be safe no matter what,” Creel said.

Poplarville School Board hears about state rating and middle…