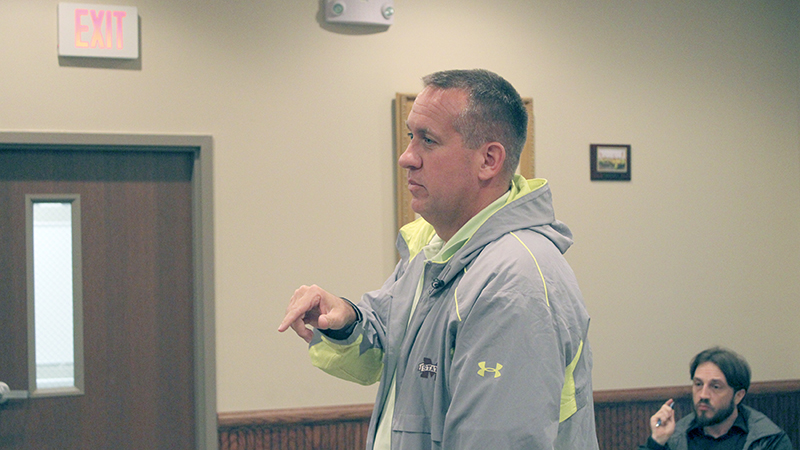 Jason Lamb of Walker and Associates updates the Poplarville Board of Aldermen on drainage work around the city. Photo by Cathy Cook.

The city of Poplarville has been awarded a $150,000 grant for the development of City Square Park.

The grant is from the Mississippi Development Authority’s Small Municipalities Limited Population Grant Program, and is for phase three of developing the park. Phase three will include the engineering of a pavilion in the park, said City Clerk Jane O’Neal. Poplarville’s Board of Aldermen authorized executing the grant agreement during Tuesday’s meeting.

In a separate matter, the Poplarville Fire Department received a $22,000 grant for new radios from the Mississippi Department of Public Safety Office of Homeland Security.

The department received half of the money it requested. The new radios will allow the department to communicate better with the county by connecting personnel via the MSWIN system installed after Hurricane Katrina. Currently, the department only has three radios that can utilize that system, said Fire Captain Donald D’Antonio.

The Board authorized sending D’Antonio to a workshop concerning the grant in Jackson. The Board also appointed D’Antonio as interim fire chief with a $2 per hour pay increase and full access to the fire chief’s truck.

In a separate matter, the Board heard an update from Jason Lamb of Walker and Associates on the 2019 Culvert and Bridge Replacement Program, which is phase two of the 2019 Road and Bridge Bond Program. Contractor Hensley R. Lee Contracting has begun work on Martin Luther King Jr. Drive, and Lamb said he expects work to take at least two more weeks. The contractor will then finish work on Beers Street, before moving on to work that was added to the original contract, which includes drainage work on Jordan Street and a paved ditch on Martin Luther King Jr. Drive, Lamb said.

—Accepted the resignation of Municipal Court Judge James H. Breeland, effective Dec. 31, 2019. In his resignation letter to the Board, Breeland said he is retiring from public service.

—Authorized soliciting loan quotes from a local financial institutions to purchase a used Johnston Sweeper for $167,880.

The next regular Board meeting is scheduled for Tuesday, Nov. 5 at 5 p.m. in City Hall.

Council approves installation of cameras at parks prone to…