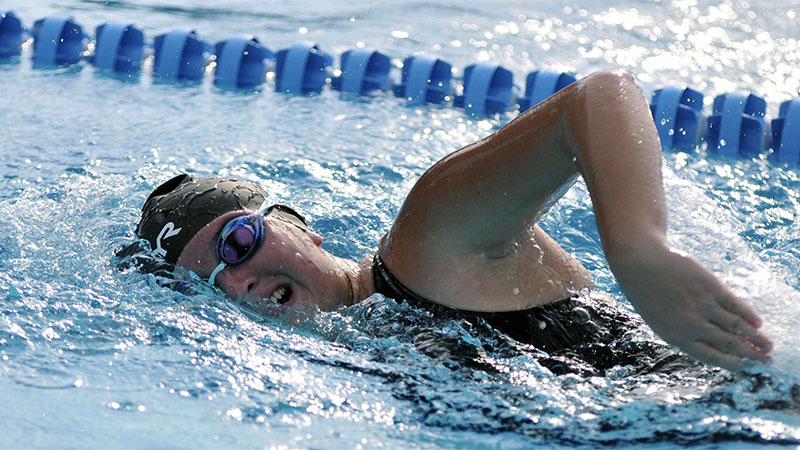 The Maroon Tide swim team participated in the Biloxi Invitational this past weekend in Biloxi, Miss.

Picayune had been to the pool before during the first meet of the season, but was using this trip as a way to focus on trimming some seconds off the athletes’ times.

It’s Head Coach Rachael Rutherford’s first year in charge of the program, and for the first couple of meets Rutherford said she had to keep an eye on her athletes to make sure they made their events.

Now, with the swimmers being more experienced, Rutherford said she could relax, and just watch her athletes compete.

“I didn’t have to hold their hand as much. I could sit back and enjoy it. They really stepped up to the challenge,” Rutherford said.

The team is relatively small, with only 18 swimmers on the squad.

However, that doesn’t stop them from cheering each other on, and that kind of environment is what Rutherford is trying to create.

“They’re all helping each other, supporting each other and making sure they’re working together,” Rutherford said.

In swimming, the athletes will sometimes get caught up in making sure they’re swimming up to their opponent’s potential instead of their own.

This is why Rutherford is having her athletes focus on racing against themselves and trying to better their times.

When they focus on the other swimmers around them it can be a distraction.

“I’m really pushing them to follow the clock, and focus on their times. I’m just making sure they’re consistent,” Rutherford said.

The athletes have been working in practice to improve their endurance, which in turn translates to faster times at meets.

A clinic was held for the swimmers where Pearl River Central’s swim coach Blake Rutherford came to the pool, and did some detail-oriented drills on specific strokes.

Rutherford said it helped her athletes tremendously, and now it’s time for the swimmers to put what they’ve learned in practice to work at meets.

“I have several swimmers who are on the edge of getting their south state times. They’ve got to get in the pool, and put those things into effect,” Rutherford said.

The next meet for the Maroon Tide swim team is Oct.1 at the Millbrook Golf & Country Club, and Rutherford said swimming in a familiar pool would benefit her athletes.

Not only that, but because of the number of swimmers none of the athletes will have to do an event by themselves, which Rutherford said is a totally different scenario compared to competing with other swimmers.

“They get to swim with their type of swimmers, and have that kind of competition. I want them to get in the water and devote that 30 seconds to do the very best at what they can do,” Rutherford said.