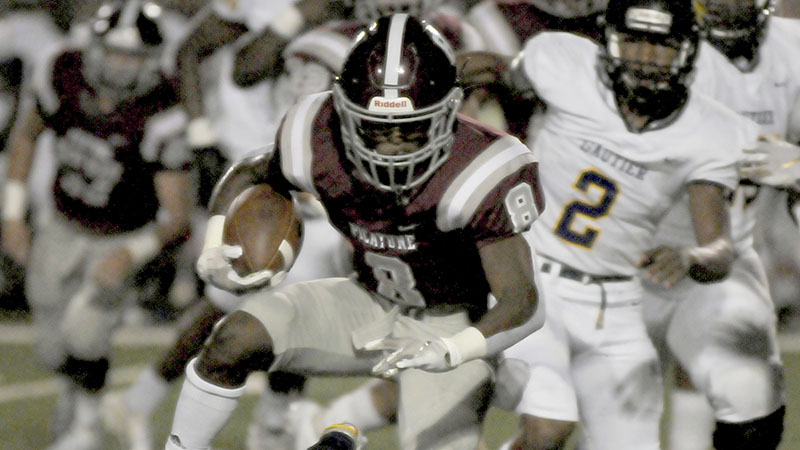 Picayune’s win Friday night against Gautier  started with 8 minutes to go in the first quarter, in a game where the Maroon Tide scored early and often against the Gautier Gators.

Running back Cameron Thomas took the ball 46 yards up the middle for a touchdown, and quarterback Jakail Meyers ran in a two-point conversion to give Picayune an 8-0 lead with 7:54 remaining in the first quarter.

The offense continued to dominate as the Maroon Tide went on to win 55-0.

An interception by cornerback Jaylen Hall late in the first quarter set the Maroon Tide up at their own 44 yard line.

Picayune pounded the ball on the ground, eating up the clock on a five-minute drive, which culminated with a 3-yard touchdown run by running back Austin Samples.

Samples stayed on to successfully kick the extra point, giving the Maroon Tide a 15-0 lead to end the first quarter.

On the ensuing kickoff Gautier fumbled, and Picayune recovered to start their next drive deep in Gator territory.

Three plays later Thomas once again ran the ball into the end zone, but the extra point by Samples was no good.

The Maroon Tide had a commanding 21-0 lead with 11:54 still left to play in second quarter.

Picayune’s defense was dominant as they throttled the Gautier offense all night forcing multiple three and outs.

After one such three and out, and the Gator’s ensuing punt, Picayune had the ball on their own 20 yard line.

A false start penalty set the team back 5 yards, but Thomas broke through the offensive line and set off down the right sideline on an 85-yard touchdown run. The extra point was no good, but Picayune was up 27-0 with 9:21 left in the second quarter.

Another Gautier three and out, which included a big tackle for loss by defensive tackle Lawrence Hopkins, saw the Maroon Tide start on offense inside their own 10-yard line.

Picayune then moved the ball down the field as Thomas started the drive with a 54-yard run up the middle.

The offense converted on a key fourth down, and used 11 plays to drive down the field, capped off by a 4-yard touchdown run from Samples once again.

Picayune’s defense would once again hold the Gautier to minimum gains before halftime.

The Maroon Tide received the kickoff to start the second half, and started on their own 38-yard line.

Big plays by Thomas got the offense into the red zone before Meyers hit an open Jaylen Hall for a touchdown to give the Maroon Tide a 41-0 lead after the extra point.

Gautier continued to struggle to get a first down with linebacker Kade Turnage making the key tackle on third down to force a Gator punt by Kyle Gager.

Picayune had the ball at their own 39-yard line, and running back Dante Dowdell added some fresh legs for the Maroon Tide.

Dowdell would carry the ball multiple times, including a 37-yard run, to set up Picayune at the Gautier 15 yard line.

Fullback Chad Dudenhefer would take things from there, and found a running lane up the gut for a 15-yard touchdown run.

The extra point was good, and Picayune led 48-0 with 5:37 left in the third quarter.

Once again the Gators failed to get anything going on offense, and were forced to punt.

Gager’s kick was good, pinning Picayune back at its own 22 with 2:12 left to play in the third quarter.

Four plays later Picayune was in the end zone as tight end Nick Doane took a jet sweep down the right sideline, and muscled through multiple would be tackles during his 56-yard touchdown run to start the fourth quarter.

The PAT was good, and Picayune was up 55-0, and would spend the rest of the game having younger players fill in.

Sophomore quarterback Dawson Underwood played the majority of the fourth quarter as Picayune had their younger players get some valuable game experience.

Like the rest of the game, the Maroon Tide controlled the final quarter of play, as Underwood took a knee to run out the clock ending the game with a final score of 55-0 over the Gautier Gators.

“The offensive line did a good job, everybody was good. But I told them they need to come back Monday, and be ready to go for our next game,” Lee said.

The Maroon Tide will travel to Hattiesburg on Oct. 11 with kickoff set to start at 7 p.m.