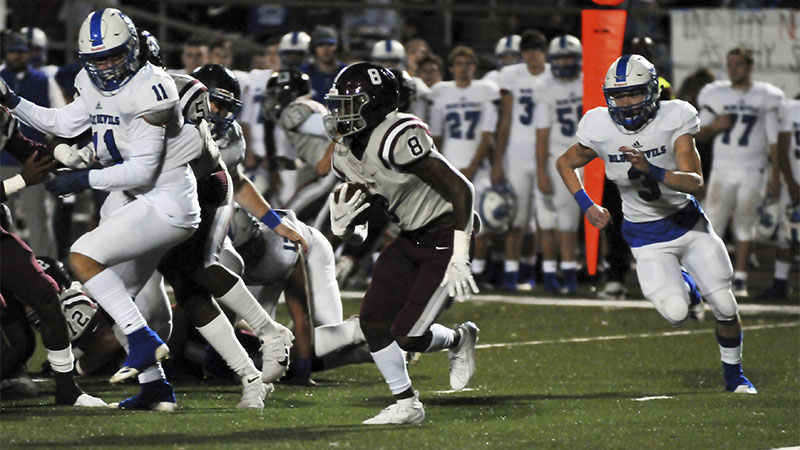 Cut up field: Picayune running back Cameron Thomas makes a cut as PRC cornerback Brady Johnson looks to catch him from the backside of the play. PRC defensive end Nick Dudziak broke through the offensive line to force Thomas outside.

Picayune took on the Pearl River Central in a testy rivalry game that ended with the Maroon Tide winning 61-7.

The Maroon Tide offense has been deadly all season, and it continued putting up points against PRC on Friday.

Running back Cameron Thomas has been the focal point of the offense, and on the first offensive play of the game Thomas took a perfectly lofted ball from quarterback Jakail Myers 75 yards for a touchdown.

It was a devastating way to start the game for PRC, and Picayune would keep up the offensive onslaught all night.

PRC’s defense has been stingy this season, and is led by a linebacking duo of Branson Logan and Clay Spiers.

However, the unit kept giving up big plays to the Maroon Tide.

Leading 6-0 Picayune got the ball back with 6:50 left in the first quarter.

Three plays later Thomas found the end zone, this time on the ground as he took a handoff up the sideline 65 yards to the house.

Austin Samples came on to kick the PAT, and this time it was good giving the Maroon Tide a 13-0 lead with 5:31 left in the first quarter.

PRC’s offense struggled to find anything on the ground or through the air against the Picayune defense.

After forcing the Blue Devils to punt the ball, Picayune had possession at its own 30-yard line.

This time it only took two plays before Thomas found the end zone for the third time in the first quarter on a 67-yard touchdown run.

Samples’ extra point was good, and the score was 20-0 with 2:16 left in the first quarter.

After three plays PRC was once again forced to punt and Kevin Wilcox’s kick bounced out of bounds at the PRC 45-yard line.

After some short gains and a false start it was 3rd down and Picayune needed six yards to pick up the first down.

Thomas answered the call and scampered down the right sideline for what looked like a touchdown only to be called out of bounds at the Blue Devils’ 5-yard line.

Even so, Thomas was able to run in for a score on the next play.

PRC would go three and out on their next possession and Picayune had the ball with good field position at the PRC 37.

Picayune once again would strike quickly, and after just five plays Thomas found the end zone after a 20 yard run to give Picayune a 34-0 lead after the PAT.

On the Blue Devils’ next possession they were able to drive the ball against the Picayune defense.

However, as quarterback Cameron Brunson dropped back to pass he was pressured by a swarm of Picayune defenders, and heaved the ball into the air.

The pass was intercepted by Samples, who took it to the PRC 49 yard line.

Picayune had only 1:10 to score before halftime, and they would do just that as wide receiver Jashawn Lee caught a jump ball from Myers, fought off the PRC defender and waltzed into the end zone.

Samples’ kick was good, and the lead was up to 41-0 with 59 seconds left in the first half.

PRC ran the clock out, and received the ball to start the second half.

The Blue Devils needed a big play to garner some momentum, and Spikes delivered on the opening kick off of the second half.

Spikes fought through multiple would be tacklers and returned the kickoff 75 yards for a PRC touchdown.

Kicker Sam Lambert came in for the PAT, sending it through the uprights and bringing the score to 41-7.

However, Picayune responded with another score of their own when Thomas took a handoff 72 yards for a touchdown on the offense’s second play of the drive.

Samples’ kick sailed through the uprights, and the score was 48-7 with a lot of football left to play.

During the next possession Picayune’s defensive tackle Deonta Reed went down clutching his leg.

Reed was the third Picayune player to have been injured on the night with leg injuries, and Lee appeared unhappy that so many of his players were hit below the knees.

As he approached Reed, there appeared to be an exchange between him and the PRC sideline.

Fans on both sides roared as the tensions escalated and play was stopped for several minutes as the referees calmed the situation.

Play restarted, and PRC was driving deep into Picayune territory when Herring got stopped short of the first down marker.

It was fourth and three, and PRC’s Head Coach Jacob Owen went for it.

However, Murray was stopped in the backfield and PRC turned the ball over on downs.

Picayune had the ball at their own 20-yard line, and drove into the red zone during a drive that saw Samples and freshman running back Dante Dowdell handle most of the running duties.

The Maroon Tide got inside the red zone, and Samples took a handoff up the middle untouched for another Picayune score.

The extra point was no good, but the lead was up to 54-7 with 32 seconds left in the third quarter.

The fourth quarter went back and forth before Picayune scored again with running back Dorian Robinson taking the ball to the end zone from 28 yards out for the final scoring play of the game.

Samples’ kick was good, and the score was 61-7 until the clock ran down.

Lee said his team played well, but that were still some things that needed to be cleaned up.

However, he did like his team’s execution on the field.

“Sometimes you have a good game plan and you’re not able to execute it. Tonight we executed it,” Lee said.

Owen said his team didn’t execute well in the first half, but that he liked his team’s fight after halftime.

The team’s fans made their presence felt throughout the game, and Owen said he was thankful for the constant support.

“There aren’t many places that draw a crowd like we do. They’re always supporting us and we really appreciate that,” Owen said.

The two teams will play again on Friday Nov. 1.

Picayune will take on Pascagoula at home, while PRC will play East Central at home.

Both games will start at 7 p.m.

Poplarville soccer getting ready for scrimmages