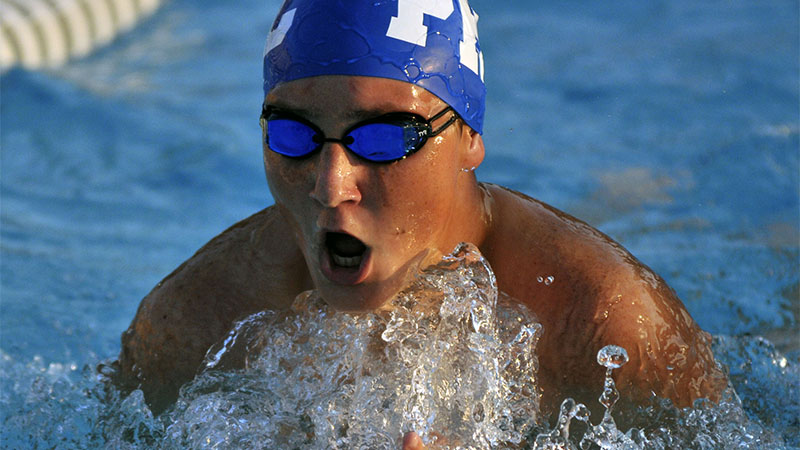 The south state meet has always been the goal for the Blue Devils’ swim team, and now the athletes need to win one more race to qualify.

Each event has a specific time an athlete has to beat in order to qualify for the south state meet.

Head Coach Blake Rutherford said the team is where he wants it to be, and the results at the last meet were encouraging.

“The team performed great.  Both the boys, and the girls team exceeded my expectations,” Rutherford said.

Relays have been a point of emphasis for Rutherford and his team because they are worth double the points of individual events.

Rutherford said transitions between swimmers during the relays have been a hurdle for the athletes, so it’s something he still wants to see improve.

However, the team came together to compete against good teams, and came out better for it.

“They welcomed some fast teams to their pool, yet had the guts and the resiliency to not only race them, but also race the clock and themselves,” Rutherford said.

The last meet of the regular season will take place Oct. 8 against Picayune, now dubbed the “Rutherford Rivalry” with brother and sister Blake Rutherford at PRC and Rachael Rutherford at Picayune having their teams face off.

“I think those swimmers who have yet to qualify know the importance of the last week of training to fine tune their technique, and hone their skills for one more valiant effort,” Rutherford said.

Building endurance has been the focus for much of the season, but with it winding down it’s the small details the athletes will need to focus on when preparing.

“I am going to make a point to revisit the little things.  They showed me this meet that they have the intestinal fortitude to ‘get after it’ and ‘dig deep’,” Rutherford said. The athletes can be seen during meets screaming and cheering on their fellow swimmers as they race. Working on building a positive culture has been a point of emphasis for Rutherford, and he likes what he’s seeing from his athletes when the race begins. “They are one big family of brothers and sisters. Our team is so supportive and inclusive to all our athletes.  The bond, and culture we have built, just keeps growing,” Rutherford said. The final meet of the regular season is approaching, which could cause anxiety for some of the swimmers who haven’t yet qualified for south state.

However, while Rutherford does want to see good performances from his athletes, he also wants his swimmers to enjoy the last meet. “First and foremost have fun. The ‘Rutherford Rivalry’ is going to be historic.  Picayune and PRC swimming used to have a great relationship, and we are finally rebuilding that,” Rutherford said.

Tide swimmers focusing on self improvement