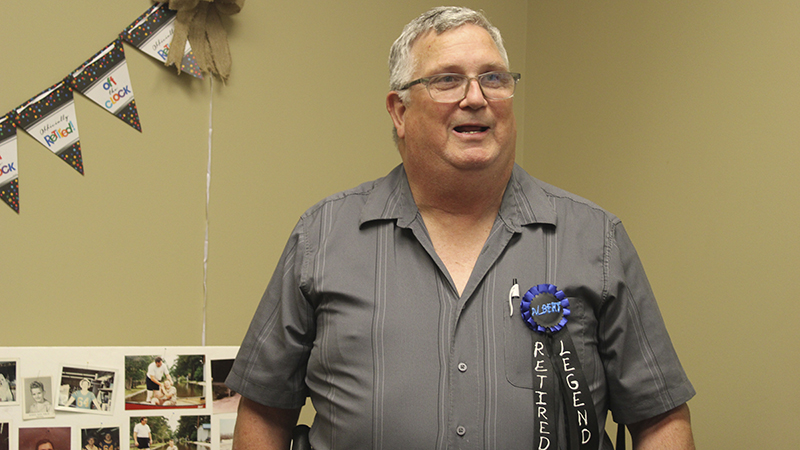 After 46 years in fire service, and 12 years as Pearl River County Fire Marshal, Albert Lee is retiring his post.

Lee’s colleagues celebrated his retirement Monday with a surprise party at the county’s E911 office.

“I’ve lived every childhood’s dream,” Lee said, of his years in public service.

Lee began his fire service work in March of 1973 as a volunteer in Slidell, he said, and quickly became a full time firefighter in November of that year. Along with fire service, Lee has worked in law enforcement as a police reserve officer and for the St. Tammany Parish Sheriff’s Department. Lee also works as deputy coroner for Pearl River County. He took the first class ever offered to be an EMT in St. Tammany Parish, said Lee’s wife Brenda Lee.

Lee’s mother was upset when he began working in the fire service, because she worried how dangerous the work can be, said Brenda Lee. Now Lee’s son and nephew have followed in his footsteps, with one working in fire service and the other in law enforcement.

“This new man’s got some big shoes to fill,” Banks said about Lee’s replacement.

Incoming Fire Marshal Jonathan Head said Lee has served the community well, and hopes to continue the work Lee has been doing.

Lee viewed his work as mission work, said E911 Director Carolyn Nelson, especially his work for the county coroner’s office. Lee worked to comfort and bring closure to living relatives when someone passed away, Nelson said.

“My main goal is to serve the public,” Lee said.

There are some cases in his four decades of service that Lee does not want to remember, but others sit with him, like when he gave comfort to a 9-year-old boy who was trapped in the back of a motor vehicle.

“He said that nametag sure is shiny, so I gave him my nametag,” Lee said.

He remembers sitting with the boy as though it were yesterday, Lee said.

The incident where a young girl was impaled on a steel gardening rod that entered her leg and traveled through her torso sticks with him, because it had a fantastic outcome. Not one of the girl’s internal organs was damaged and she was able to recover, Lee said.

“I cherish all these years,” Lee said.

Now that he’s retired, Lee plans to put more miles on his motorcycle.