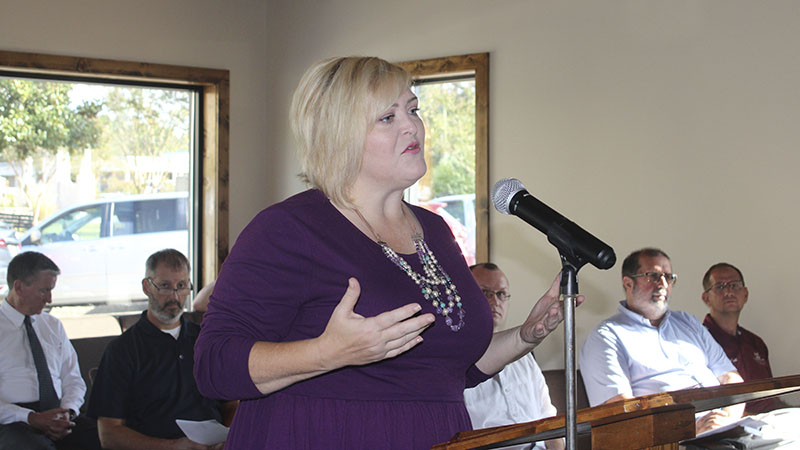 Rene Davis from the Gulf Coast Center for Nonviolence explains to the Board of Supervisors what services the center provides. The Board proclaimed October Domestic Violence Awareness month at their meeting Monday. Photo by Cathy Cook.

During Monday’s meeting the Pearl River County Board of Supervisors acknowledged setting a date to hold a household hazardous waste collection day.

The county will be accepting hazardous waste, like oils, batteries, fluorescent lamps, items containing mercury, aerosols and paint, on Oct. 26 at the Pearl River County Barn on Highway 11 in Millard from 8 a.m. until the grant money to accept waste is expended. Last year, county crews had to stop accepting waste after less than two hours, said Fire Marshal Albert Lee, but they hope to accept waste for a longer period of time this year.

In a separate matter, the Board heard an update on the effort to create a county wide centralized dispatch. Representatives from the county, the city of Picayune and the city of Poplarville met Wednesday to discuss two proposals, said County Administrator Adrain Lumpkin.

Lumpkin said he believes the centralized dispatch will be operational by June of 2020, because work to make the change should take approximately six months once a plan is finalized. Currently all emergency personnel dispatches come from two offices, one in the Picayune Police Department for that department’s officers working within the city, and another at the county jail in Millard for all calls for deputies with the Pearl River County Sheriff’s Department and officers with the Poplarville Police Department.

In a separate matter, the Board authorized partial payments for personal property and mobile homes taxes, which allows property owners to pay 50 percent of their taxes when due, and pay the difference in two additional payments, said Tax Assessor Gary Beech. Without the Board’s authorization, the tax office would have to take 100 percent of the payment at once, Beech said. The Board has authorized partial payments in previous fiscal years, Beech said.