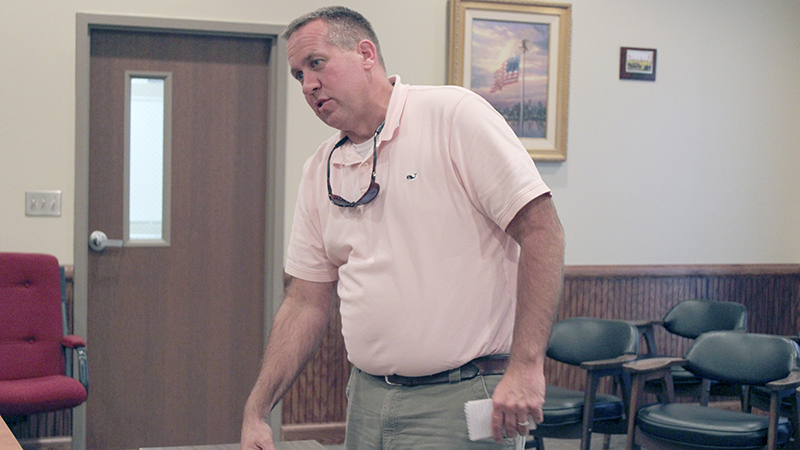 The Poplarville Board of Supervisors called a special meeting Wednesday evening to address personnel matters in the police department and drainage work on Martin Luther King Jr. Drive.

The Board passed a motion to suspend an unnamed police officer without pay for an undisclosed reason. The suspension is for the maximum amount of time that an officer can be suspended, which is 120 hours.

Before the motion, the Board entered executive session to discuss personnel matters in the police department with Chief of Police Greg Hartley.

After exiting executive session, Alderman Kevin Tillman made a motion to terminate the officer in question. No one seconded Tillman’s motion. Then Alderwoman Shirley Wiltshire made the motion to suspend the officer, which passed. Tillman voted against the motion for suspension.

None of the public officials present gave a comment on the circumstances surrounding the suspension.

The officer who was suspended Wednesday is not the same officer asked by the Board to resign last week, said Board member Anne Smith.

In a separate matter, the Board approved a change order for the drainage work on Martin Luther King Jr. Drive that will add $18,999 to the existing contract of $399,579 with Hensley R. Lee Contracting. The contractor found that underneath the road there is organic soil, old bridge timbers and cypress trees, so the eight inch foundation workers planned to lay would not be sustainable, said Jason Lamb with The Walker Associates. Instead, the contractor will have to place two feet, eight inches of a variety of limestone gradations, Lamb said.

The work on Martin Luther King Jr. Drive will not resume until Monday, Lamb said, so none of the materials the city is investing in for the road’s foundation will be in the ground in the event of a significant rain event over the weekend.

The roadwork is part of phase two of the 2019 Road and Bridge Bond Program. The Board approved a $13,653 change order to the contract during a meeting held Oct. 1 for drainage work on S. Allen St. The project is funded by a bond that will be repaid from fuel diversion taxes, according to previous coverage. The bond is for $1.3 million and $600,000 was budgeted in August for asphalt paving, according to previous coverage. The Board also budgeted for unexpected drainage costs, but additional unexpected costs may reduce the amount the Board can spend on asphalt paving, Lamb said.

Board hears request from PRVO for Head Start bid