School districts receive As and Bs 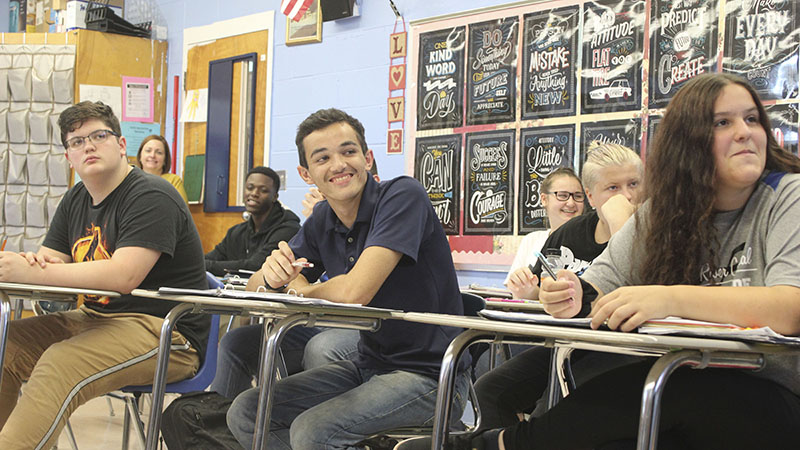 Ms. Roxie Lee’s U.S. History Class listens to a lecture Monday at Pearl River Central High School. Student progress in U.S. History is one of many academic factors that determine a school’s grade.

Mississippi school accountability grades were released Thursday by the Mississippi Department of Education.

The grades are a report card for the community to see how schools are performing academically, said Pearl River Central School District Superintendent Alan Lumpkin. Lumpkin said his District also uses the data from the scores to make decisions about where the District needs to improve and to target academic goals.

Schools are offered incentive funding through the state’s School Recognition Program for achieving an A or B, or for improving by one letter grade from the previous year, according to the Mississippi Department of Education accountability FAQ.

Schools that improve a letter grade receive $100 per student, an A rated school receives $100 per student and a B rated school receives $75 per student. Schools that both improve a letter grade and receive an A or B only receive incentive funds once. The funds are equally distributed to certified staff, teachers and counselors, at the school. Administrators do not receive incentive funds.

Across the state, 70 percent of districts were rated C or higher, the release states.

The Pearl River Central School District received a B rating, as it did in 2018. The District was seven points away from an A rating, Lumpkin said.

Lumpkin said he believes the improved ratings reflect that the school is data driven and uses data to make decisions about curriculum improvements.

“The academic success of our school District is a total team effort from the students, to the teachers, to the support staff, to parents and members of the community,” Lumpkin said.

Ensuring students can get to school, are well fed and feel safe at school are all necessary to allow students to learn, Lumpkin said.

District administrators are currently reviewing the ratings and will use the data to create an improvement plan for the next school year, which will be presented at the next Board of Trustees meeting on Oct. 10, Lumpkin said.

The Poplarville Separate School District received an A rating, a letter grade improvement from its 2018 B rating.

Poplarville Lower Elementary received a B in the school years ending in 2018 and 2019. The Upper Elementary School received a C, moving down a letter grade from its 2018 B rating the year prior.

A request for comment from Poplarville Superintendent Carl Merritt was not returned by press time Monday.

The Picayune School District received a B, moving up a letter grade from its 2018 rating of a C.

A request for comment from the superintendent was not returned by press time.