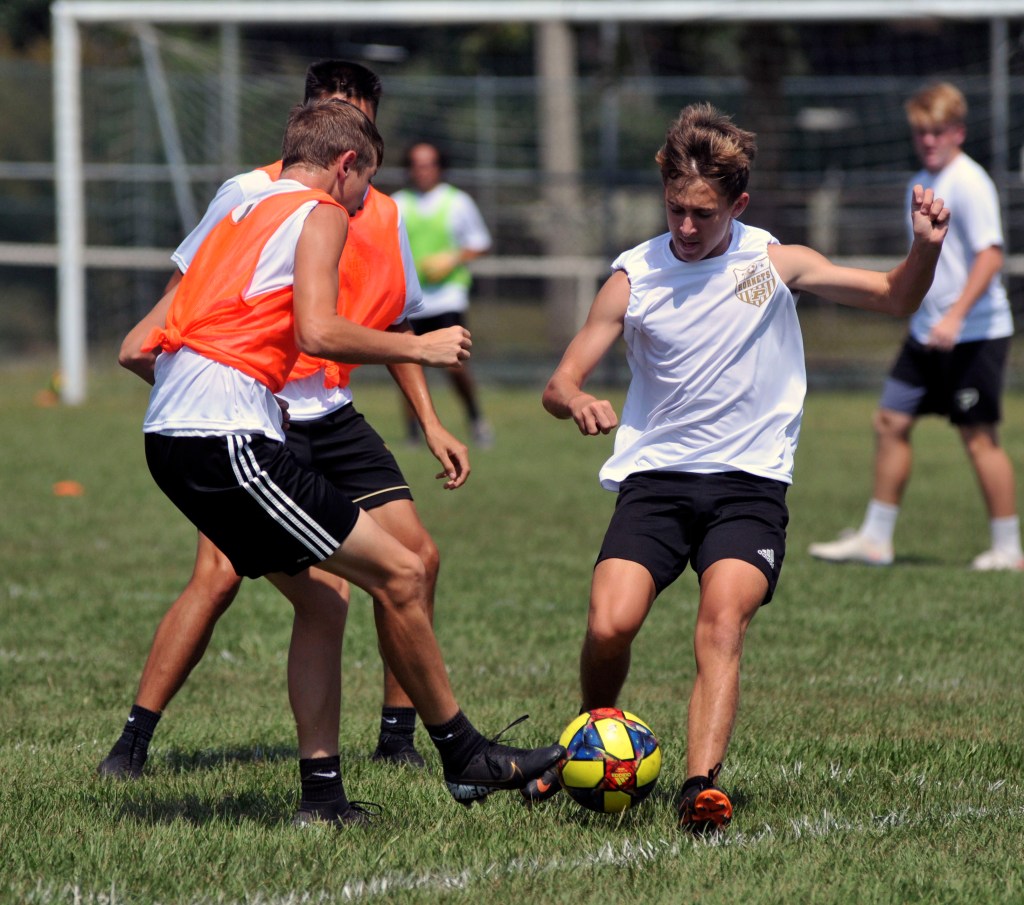 Jonathan Mitchell | Picayune Item Fight for possession: Sophomore Zach Carpenter, left, and junior Logan Price, right, battle for the ball while playing in a scrimmage during the varsity squad’s practice.

The squad was split into two teams as a scrimmage ensued comprised of the Poplarville Hornets boys varsity soccer team.

With one set of 11 donning orange jerseys the two teams faced off for some friendly competition, which took place in 20-minute intervals.

The team is coming off a successful season in which it won the district championship, and broke the school record for wins in a single season.

However, several key players have left the squad, and that has meant Head Coach Luke Gipson has been looking for players to step up and fill those positions.

Gipson has the week divided into three sections for workouts.

One day is set aside for scrimmages and practicing game like situations.

With so many young players coming through the pipeline, Gipson has been having his athletes focus on the basics of soccer, like passing, dribbling, shooting, etc.

It’s also important for the newer players to have positional awareness and understand the team’s system, which is where the scrimmages come in handy.

Gipson said the team wants to build off of last year’s success, and the players have stepped up to the challenge.

“I feel like everyone on the team has accepted the challenge to replace a really good senior class and they’ve all stepped up,” Gipson said.

“I think last year’s success has fueled and motivated my team for their chance to step up since it’s now their turn.”

Some of the players who have stood out to Gipson are central midfielder Gavin McGowan, forward Seth Santiago, Sonny Davis and Gavin Lee at center back, and new goalkeeper Donovan Minor, just to name a few.

Each year the team comes up with a motto, which serves as the squad’s motivation for the season.

This season the players have chosen “Be where your feet are.”

“The motto’s meaning is like it sounds, mentally be where your feet are. So if you’re at practice, be engaged with what skill we’re working on at the moment, not what you would rather be doing,” Gipson said.

The motto also serves the athletes off the field. Gipson said it stresses the importance of doing well in school, and spending time with loved ones while not on the field.

Gipson doesn’t expect his team to get complacent after last season’s success, and he said the team would use it as ambition to improve again this year.

The team will go through some growing pains as the young players catch up to the speed of the game.

That doesn’t mean the newcomers haven’t stepped up in a big way to fill the voids left by players who graduated.

“They have stepped up in practice by becoming servant leaders, helping in any way possible and motivating younger players to step their game up,” Gipson said.

Expectations are high heading into the upcoming season, with early games starting in late October.

Gipson is excited to see what his athletes accomplish, and what the team will look like when the season starts.

“I think we will be very competitive,” Gipson said.

I trust these guys to give me everything they have and compete to the last second.”