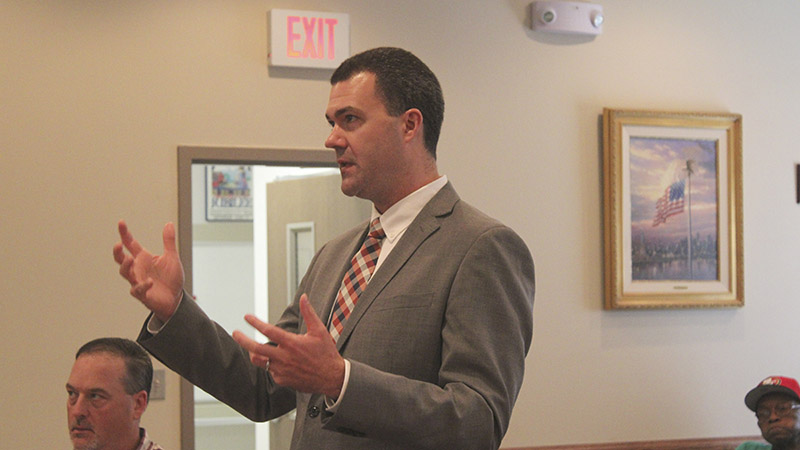 Mississippi Main Street Association’s state coordinator Thomas Gregory gives the Poplarville Board of Aldermen a presentation on the association during Tuesday’s Board meeting. The Aldermen took Gregory’s presentation under advisement.

The Poplarville Police Department is applying for a $44,485 Mississippi Homeland Security grant to support the city’s participation in the implementation of a consolidated Pearl River County Dispatch System.

If awarded, the grant would pay for mobile computer aided dispatch equipment and record management system service for a year, along with laptops for patrol vehicles, vehicle computer stands and either air cards or mobile hot spots with a year of service.

The Board of Aldermen approved the grant application during Tuesday’s meeting.

The new system will automatically transfer information into the report writing system used by officers that is collected by dispatchers while they take calls, Hartley said.

Purchasing laptops and CAD and RMS systems for the police cars would allow officers to run tags in their car, freeing up dispatcher resources, and provide a method to write reports while in the field, Hartley said.

“That’s one of my goals, is to increase the equipment and technology that officers have access to so that they can do their jobs more efficiently and keep us on the cutting edge of technology,” Hartley said.

In a separate matter, the Board heard from Jason Lamb of The Walker Associates that drainage work has progressed at four sites for the 2019 Road and Bridge Bond Program. The contractor is working on smaller sites in August and Lamb expects the work on larger sites to begin in October when there are longer periods of dry weather.

There have been minor delays with the project so far, Lamb said, including the need for a new water line and hydrant on Woodard Street.

Lamb also updated the Board on drainage issues along Martin Luther King Drive. A ditch on the south side of the road has been overflowing a residence, and Lamb said he recommends paving a ditch in concrete to remedy the drainage issues.

Lamb said he expects the money set aside for contingencies in the project will cover the cost of the challenges so far.