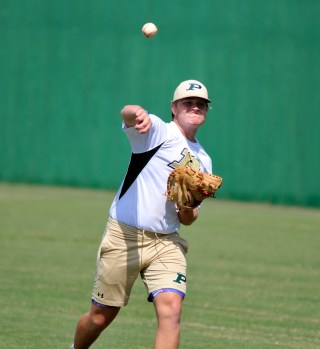 Jonathan Mitchell | Picayune Item Getting warmed up: Senior Hunter Blackwell warms up his arm before the practice begins. Blackwell is a catcher for the Hornets. 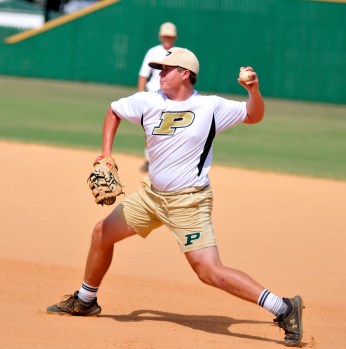 Jonathan Mitchell | Picayune Item On the hop: Freshman Joseph Blakeney fields a grounder and fires it over to third. Blakeney is a left handed pitcher, first baseman and outfielder.

The practice started off simple enough for the Hornets’ baseball players as they went through the usual stretches.

Then came the arm warm ups, before the players tossed the ball back and forth to each other as they gradually increased the distance between them after a few throws.

Eventually some of the players were throwing from deep center field all the way to the foul ball line.

Having the necessary arm strength to make those throws comes from repetition and time in the weight room.

Head Coach Slade Jones said one of the biggest positives he’s seen from his team has been the progress the athletes have made in the weight room.

Baseball is a unique sport in that athletes must have the necessary flexibility to torque their body in order to bat well and field balls.

However, the players also need to have the requisite upper body strength to make the correct throw when the time comes.

“We focus on the big compound movements. We like to stay flexible up top and strong down below,” Jones said.

Jones said last year was about looking at the big picture and making team-wide adjustments, this year the focus has been on the little things.

“Last year was a macro overhaul, and now it’s more of a micro overhaul. They’re just not used to it,” Jones said.

Once the team has warmed up, they went through a series of defensive fielding drills.

The drills moved at a breakneck pace, and had the players shift through a variety of situations.

The drills included fielding balls in the outfield and relaying them to the catcher, fielding a grounder to third base and throwing the ball on the run to first, along with a number of other scenarios.

“We try to play live as much as possible, and the good thing is the core of our guys are out there,” Jones said.

Jones said the team as a whole has improved tremendously, and senior third baseman Brady Tynes and senior outfielder Rhett Garrett have stood out during the workouts.

Another aspect of the game Jones has his team focus on is the mental part of baseball.

On Wednesday Jones and the team went through a bullpen walkthrough to talk about specific details of the game.

“We didn’t throw, and really we just talked about mental stuff. How we’re going to approach pitching to certain locations with certain handed hitters, and things like that,” Jones said. Jones also tries to have his athletes go through pressure situations during practice to better prepare them for games.

That includes having a single player determine the amount of conditioning the team performs at the end of practice. “We’ll line the whole team up, and give one guy a chance to get a sacrifice bunt down. If they get it down we don’t run, and if they don’t then we’re running,” Jones said.

Not succeeding isn’t the end of the world for Jones and his athletes.  The coaching staff understands how failure can serve as a learning opportunity, and that’s one of the changes Jones made to the program’s culture. “It’s not always going to be perfect, and you have to get back up. They’re not afraid to fail, and they grow from it,” Jones said.