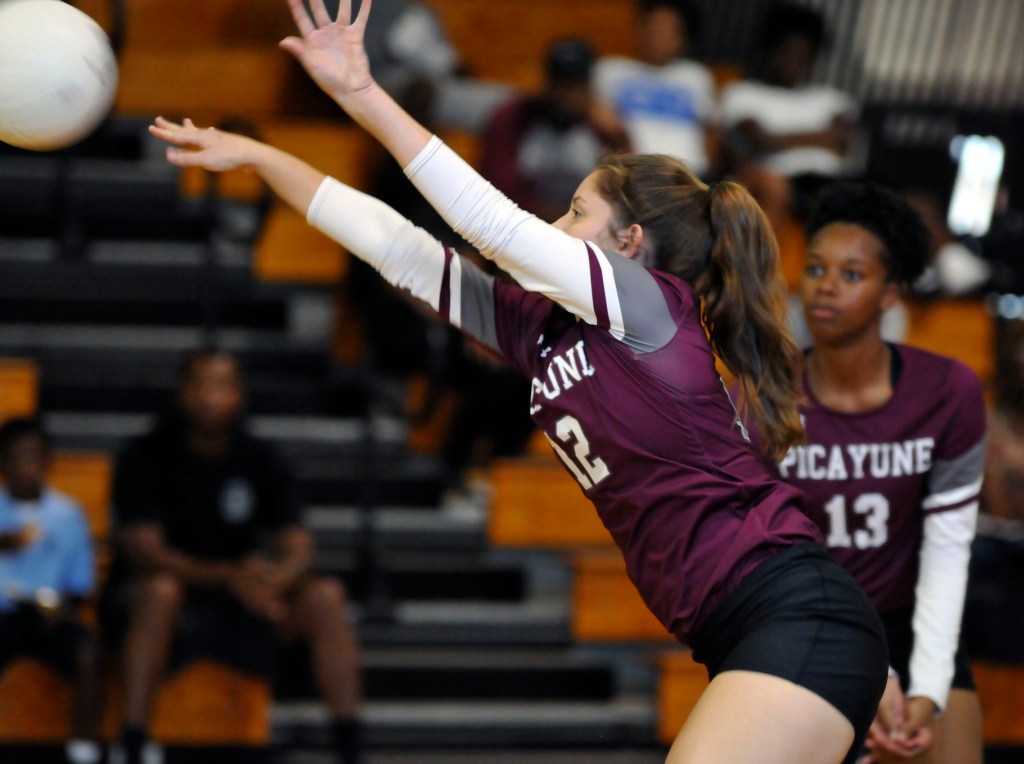 Jonathan Mitchell | Picayune Item Keeping it off the ground: Senior Sarah Stockstill excelled during her first game as a libero for the Picayune volleyball team.

The Maroon Tide volleyball squad fell on tough times lately, and were going through a little bit of a slump.

That changed with the Maroon Tide coming out on top against a Poplarville Hornets squad, who was on a roll their most recent couple of games.

The final two sets were all Picayune with the third set having a close score of 25-23, and the final set ending 25-15.

Head Coach Courtney Dickens used the game as a way for some of her younger junior varsity players to get some playing time with the varsity squad.

Junior Abby May and sophomore Alexis Hansen served the ball well all night, while junior Destiny Hannah played as an outside hitter.

These players were given time on the court so Dickens could change the team’s system.

A libero is a player that needs to be good defensively, and have a keen eye for passing.

That’s exactly what senior Sarah Stockstill brings to the team, and it was her first night playing the role of libero.

There was a lot of shifting amongst the lineup, and players who had grown comfortable playing next to each other now had to learn the habits of new players.

“I switched a lot of things around,” Dickens said.

“Nobody changed positions, but whenever you’re playing with different people it’s hard. It makes a difference.”

There were some growing pains that led to some inconsistency for the team to start the game.

However, the squad recovered, and the young players produced in a big way.

The seniors played a key role as well with Aliciana Carter and Kyla Harris both having key blocks, as well as a few kills.

“They helped us get that win and that was really big for them,” Dickens said.

“They really stepped up, and they did what I asked them to do.”

The team will now use the win as something to build on as they head into their first district matchup against Hattiesburg. That away game will take place today, and will start at 6:30 p.m.

“It felt good to get that win,” Dickens said.

“It seems like it’s been so long, and that’ll help us going into our first district game.”

The squad has struggled closing out games at times this season, and to get a win over a rival like Poplarville will give the athletes a confidence boost as the team heads into the tougher portion of its schedule.

“We’ve been trying to dig around, and figure out why we weren’t finishing these games,” Dickens said.

“But now we’ve had some people step up, and we’re going to roll with this.”

The team also has more on the line this year as it’s the first year Picayune has been in a district.

That means there’s a shot at the playoffs and district title.

“They’re excited because we’re in a district, and have something to play for,” Dickens said.

“I believe anybody can be beaten on any given night. We’re going to go play hard and compete, and we’re hoping to bring home our first district win.”