Picayune girls soccer working to get better before the season starts 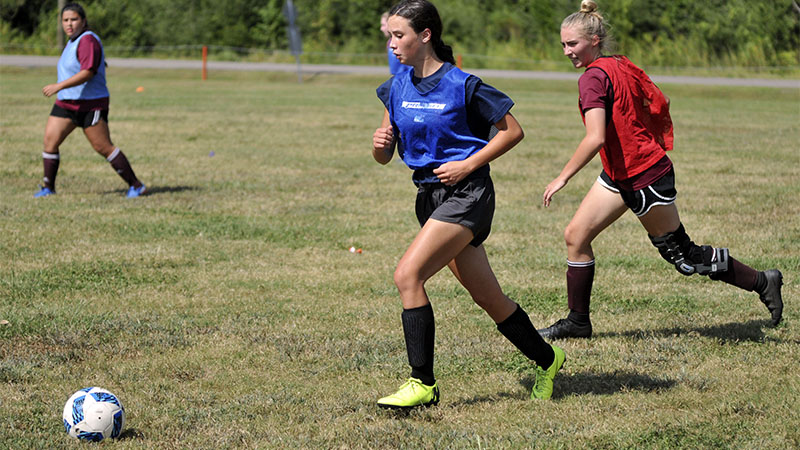 Jonathan Mitchell | Picayune Item In pursuit: Freshman Malorie Owens dribbles out of danger as junior Kaitlyn Williams looks to chase her down and regain possession.

Players in Picayune’s girls soccer team split into two squads donning either a red or blue jersey as they prepared for a scrimmage.

It was the end of the practice, and the necessary drills had already been completed, so now the athletes could compete against one another.

Head Coach Ed Williams makes sure the team stays balanced in practice when it comes to drills.

After a short warm up, players go through skill drills before branching off into separate groups to focus on offensive and defensive principles of the game.

“We have both a micro and macro plan for practice, so we know what we want to accomplish for the day, week, month and ultimately for the season,” Williams said.

There are additional daily drills, which focus on speed, strength and endurance.

Even with the Mississippi sun beating down on the athletes in the middle of the afternoon, the athletes’ intensity during practice is always there.

“We have a core group of young players who have played soccer most of their lives. They drive the intensity at our practice every day, because they know what it is like to play at a highly competitive level,” Williams said.

Another major focus for Williams has been his team’s understanding of the tactical side of soccer.

There needs to be a knowledge of the game, so the defenders can link up with the midfielders, and so midfielders can feed the ball to attacking players.

The majority of players on the squad are young in age, but when it comes to experience in the game, the players have plenty.

Some of the athletes have been competing on the varsity level since they were in middle school.

Williams said junior Kaitlyn Williams, sophomore Bailey Craft, and freshmen Kadie Craft, Abbie Davis and Makenna Williams are all athletes who may not be seniors, but definitely have knowledge of the game as experienced players.

Williams has been trying to implement a change in culture in a program, which didn’t have an offseason workout regimen when he took over. It’s a process that takes time, but he’s seen the improvement already, and his players are buying in.

“We have made major improvements in work ethic, commitment and dedication to the team. The team chemistry is the best I have experienced since I have been at Picayune,” Williams said.

The season is just over a month away, but the team’s preparation has been ongoing for months. Time will tell if the players will improve on last year’s results, but Williams said the program’s future is bright. “I am very proud of the work these young ladies have put in over the summer, and at the start of the school year. I am very optimistic about this season, and the future of our program,” Williams said.