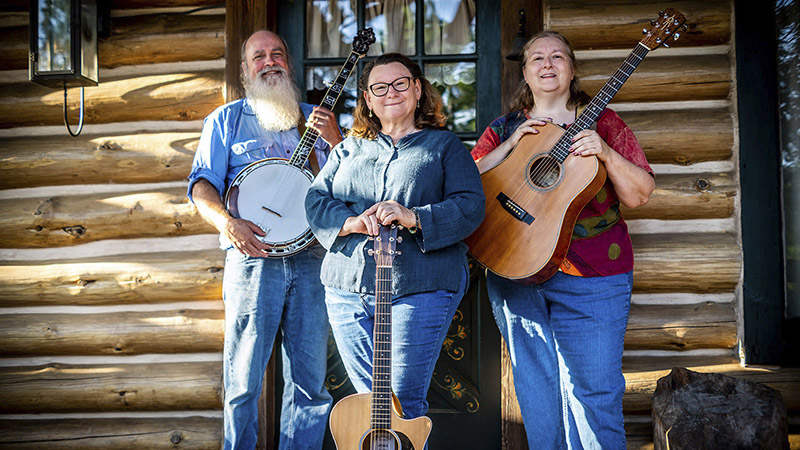 The Boggy Branch Trio, featuring Pat Drackett, Jim Elledge and Diana Thornton, will be performing from 2 to 4 p.m. The concert is free and refreshments will be served.

Elledge has been singing and playing music since he was 8 and began playing banjo at age 12. He played the New Orleans Jazz Festival in 1995 and 1996, but didn’t begin writing songs until 2015. Elledge built his black walnut banjo.

Thornton stopped playing music 20 years ago when she began designing and manufacturing CDs for New Orleans musicians. However, a year ago she began playing guitar again with a circle that meets in Anchor Lake, and now is excited to write new music and perform.

Drackett also put the guitar down for many years, until a little over a year ago, when she began playing again with the circle. Drackett said she feels lucky to play with Elledge and Thornton.

“They both have such a way with words, and they’re an inspiration to me, and it’s a great example of how people that you play with in a group, you can exponentially just improve each other,” Drackett said.

The trio will be performing a mix of old fashioned songs with acoustic guitar and banjo, and Elledge and Thornton will also be performing original music, Drackett said.

The concert is the first Friends of the Margaret Reed Crosby Memorial Library program for the fall, said chairman Linda Hanberry. The Friends of the Library host a free program once a month from September through March, Hanberry said.

The next event will be a self-defense class on October 20 with Bret Barras, which participants will need to sign up for, Hanberry said.