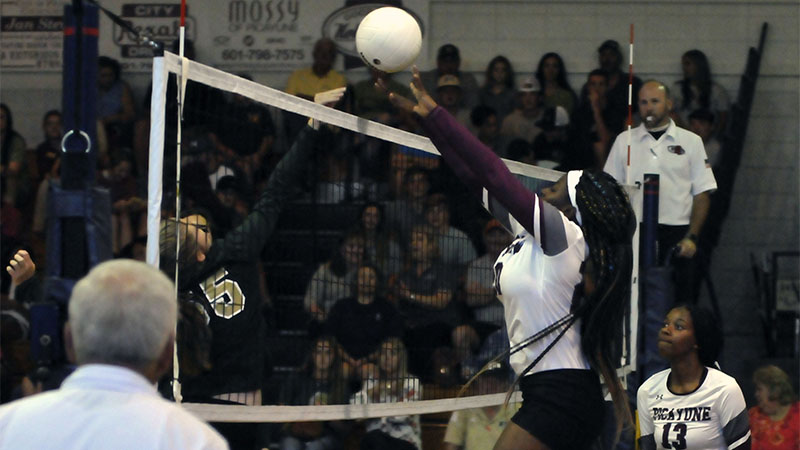 Jonathan Mitchell | Picayune Item Up for grabs: Both teams did a good job of contesting shots at the net. However, there were multiple instances where a player’s hand crossed the top of the net, which counts as a point for the opposing team.

Even with both programs being new to the scene, that didn’t stop the athletes from providing their fans with a hard fought game.

Athletes on both sides of the net gave it their all, diving on the floor to keep loose balls in play with a packed gym of fans looking on.

The fans played a major role in the game, constantly chanting and cheering for their favorite teams.

It was a home game for the Maroon Tide, and it showed with the crowd very heavily favoring Picayune’s players.However, Poplarville had support make the trip in order to cheer on and encourage their players.

The first two sets of the game saw the Maroon Tide use their serving skills as a way to put the Hornets on their heels.

However, by the third set of the match the Poplarville squad was fired up. It was a tense affair with the teams going nearly point for point before Picayune pulled out the victory winning three sets to Poplarville’s zero.

The victory was the second of the season for the Maroon Tide, and they’re off to a running start with a 2-1 record heading into the next game against Purvis High School. However, Picayune’s Head Coach Courtney Dickens said there was plenty of room for improvement.

“I think once again the communication between setters and the other girls was off,” Dickens said. “There was a big crowd, and I thought the noise had a lot to do with it.” Dickens said that the team would return to practice with plans to work on the fundamentals of the game, especially focusing on serving and passing.Athletes on both sides of the net performed well, and Dickens said that the level of competition Poplarville provided was an important lesson for her team.

“Poplarville was really impressive,” Dickens said. “They handled themselves really well, and controlled the ball well.”

The energy of the crowd was an aspect of the game that Dickens appreciated with fans from both teams being vocal throughout the match. “It’s always good to have a good crowd, it means a lot to the kids on both sides of the court to have support in what they’re doing,” Dickens said. “Poplarville always brings a big crowd, and I think that helps all of the kids play harder.”

The number of fans in the stands points to interest from the community in the sport, and Ray said that’s a good sign for both volleyball programs moving forward.

“Picayune had a packed gym, it was a good crowd. It’s just good to see the excitement for the girls and the sport.” The Poplarville Hornets’ next game is at home August 20 at 6 p.m. against Lumberton. The Picayune Maroon Tide’s next game will be played on August 19 at Purvis at 6:30 p.m.