The end of the ‘Baddest Devil’ Camp signals new beginnings 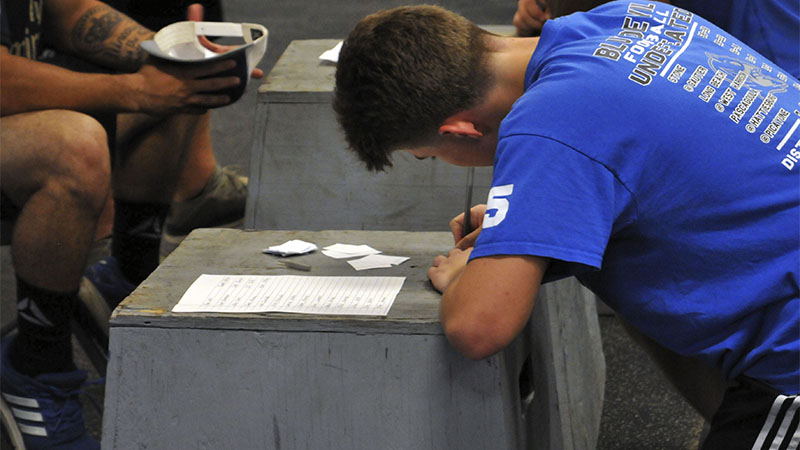 Jonathan MItchell | Picayune Item Choose wisely: Blue Devils’ players were charged with voting in two captains. Coach Owen told the players to consider leadership, effort, and other traits as well when electing their teammates for the position.

The athletes had run a mile earlier in the morning, completing the last of the physical tests the players had been put through during the week.

They sat quietly in a semicircle around Head Coach Jacob Owen in the field house as he began divulging who had performed the best during the week of the ‘Baddest Devils’.

First came the weight champion being named, then the most improved, and finally came the moment the athletes had been waiting for all week.

The announcement of who made it into the top 10 of the ‘Baddest Devils’.

Owen started off with number 10, and after every announcement was a roar of approval from the athletes and a number of handshakes and pats on the back for the player who had been named.

Owen worked his way down the list before eventually reaching number one, the ‘Baddest Devil’.

There was a slight pause, and then a cacophony of cheers as Owen named Kevin Wilcox the ‘Baddest Devil’.

The competition took place over the entire week, with performances in weight lifting, agility drills, and speed challenges being taken into account and weighted with a certain number of points.

Wilcox had earned the most points throughout the week, and as such was automatically named captain.

Once the players had settled down they were sent into the locker room before being brought out in pairs to vote on the rest of the team captains.

Each player wrote two names on a piece of paper before dropping it in a hat.

Once they’d all voted the numbers were tallied up, and the Pearl River Central Blue Devils had their four captains.

The coaches then went into the locker room where the players had been sequestered so the choosing of the captains would remain private, and broke the news.

The hooping and hollering echoed down the halls as the players congratulated their new captains Kevin Wilcox, Clay Spiers, Ronald Murray and Josh Hansen.

Once business was taken care of, it was time to relax and enjoy the rest of the day.

Parents and friends of the program had been working all morning in preparing a massive spread of food for the players and coaching staff.

There was also a basketball hoop, and two inflatable slides that were taller than the field house itself for the players to enjoy.

The camp was a preparatory measure just like the rest of the team’s summer workouts to get ready for pads to come on.

With school starting up, and the start of the season just a couple of weeks away, Coach Owen said the Blue Devils are looking forward to their first game.

Pride of the Tide use summer to learn new…