Pride of the Tide use summer to learn new routines 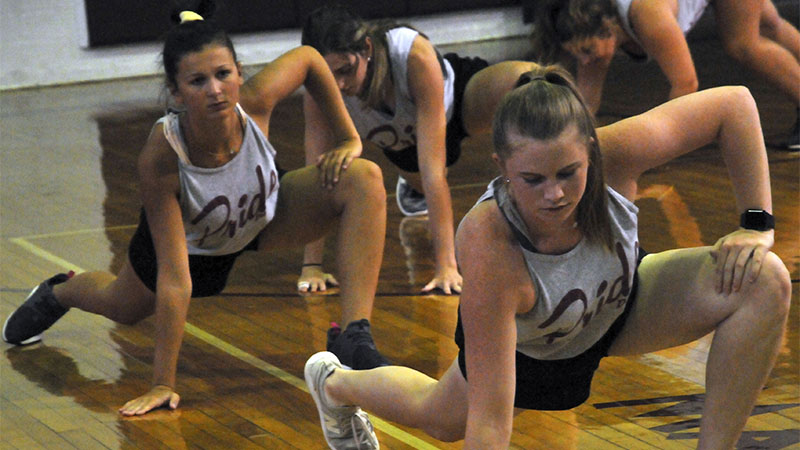 Jonathan Mitchell | Picayune Item Fast learning: The Pride of the Tide are tasked with learning a number of routines that they’ll show throughout the year. However, before every practice the team goes through a number of stretches to warm up.

The first week of June the Pride of the Tide dance team traveled to Mobile, Ala. to take part in the Dance Team Union Camp.

The camp was a three-day affair that featured a variety of events.

There were fun activities like a scavenger hunt and rap battle to help build team chemistry.

Then the girls got down to business and learned 10 full dance routines during the camp’s process.

In the past, the Pride of the Tide would have a camp in town, but Director Shanna Kirkland wanted to give the girls a different kind of experience this year.

The camp didn’t come without its costs, so to cover those expenses Kirkland and her team participated in a plethora of fundraising opportunities.

The athletes sold ads to local businesses that will be featured on the back of their team shirts during shows.

The team also sold Chick-fil-A sandwiches at school during breaks between classes, and hosted a car wash that netted them more than $600.

Once the team had the funds, they left for Mobile and came back stronger and ready to roll for the next year.

Kirkland would split the team into groups and each group would learn a different dance as the days went on.

Then when all of the dancers reconvened they could show each other the intricacies of each set, and better understand the moves within it.

Kirkland said they also learned communication skills, which is important when the team came back into town and had to teach others the routines and choreography.

Camp wasn’t the only learning experience for the team.

Then the athletes joined the band for its two-week camp.

“It was hot, but not as hot as last year. You get used to it really quick.”

With the band’s show songs that will require new routines as well, the athletes are tasked with learning over 20 sets that they’ll perform throughout the year.

“This group is really quick, and they have big hearts,” Kirkland said.

That empathy allows the girls to fundraise well, and they also take part in other events like an alumni clinic where former dancers return to perform. They additionally participate in Adopt a Grandparent Day where they’ll go to a local nursing home, and spend time with the residents.

“They may not like getting up so early, but once they get there they really enjoy it.”