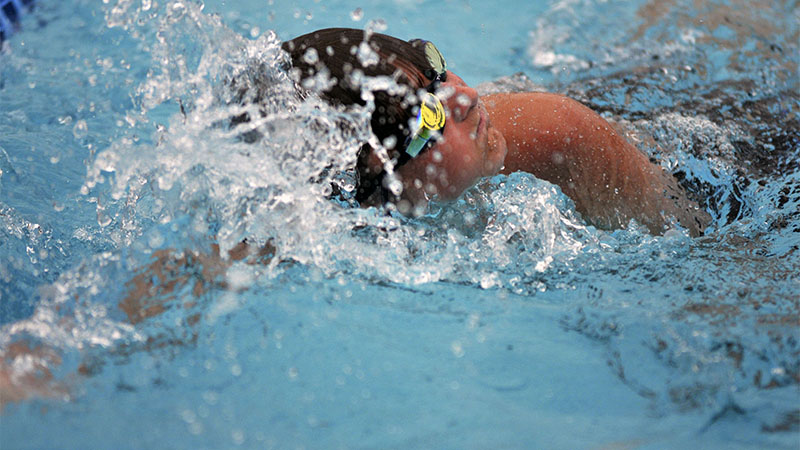 Jonathan Mitchell | Picayune Item All in a day’s work: The PRC swim team holds practices that last for an hour and a half, with that number increasing as the season progresses and conditioning becomes more important.

The swimming lanes were filled with athletes as Head Swim Coach Blake Rutherford had his swimmers go through a number of different strokes as they cut through the water.

Pearl River Central High School’s swim team has grown to the point that Rutherford had over 42 swimmers when the program started practice sessions on Aug. 7.

Tryouts are as much about Rutherford and Assistant Coaches Shelly Dill and Beverly Griffing looking for new talent as it is determining what events returning swimmers will be participating in.

Because of that, Rutherford said tryouts aren’t intense as far as conditioning goes.

Instead, he and his coaches have their athletes focus on perfecting technique.

Whether it be getting a certain stroke down, or learning how to properly breathe without slowing, the athletes are trained on the minute details of swimming that make all the difference.

“I don’t kill them at tryouts,” Rutherford said.

“I just try to get them to see my passion, and work on some techniques.”

It takes time for swimmers to master a certain stroke, and even longer still for the swimmer to do it quickly.

That’s why Rutherford has been trying to get more middle schoolers involved in the program.

By getting them involved in that grade level, he has more time to train those athletes,

This in turn makes it easier to have a full program where talent is always rotating out.

“We’re starting to build the triangle from the bottom,” Rutherford said.

“I would rather build from the bottom, so that if a senior leaves someone can step up.”

Having that pipeline of talent is crucial in order for the program to remain competitive against other schools during meets.

That relates to an aspect of swimming Rutherford said many people don’t think of.

“A lot of people don’t realize the team aspect of swimming,” Rutherford said.

“It’s individual in that you do the best for yourself, but you score points for your team. It’s a selfless sport.”

That selflessness also translates to the practices Rutherford and the other coaches have because the athletes know they’re working towards a bigger goal.

That’s what makes spending the hours in the pool worth it for the athletes.

Rutherford said spending that time on the sport is necessary in order to be successful.

“You have to be technically strong,” Rutherford said.

“It’s a technical sport, and the shortest event for a fast person is 23 seconds.”

“Where as in football a play lasts 5 seconds and then they get to rest.”

Rutherford said some of his athletes need the conditioning of the multi hour practices in order to maintain their form at the pace necessary to win.

“The key is able to be physically fit enough to be able to hold it together when you race,” Rutherford said.

Rutherford said that the work done now is what will determine how successful the athletes are when competitions start.

The grind continues for Picayune basketball