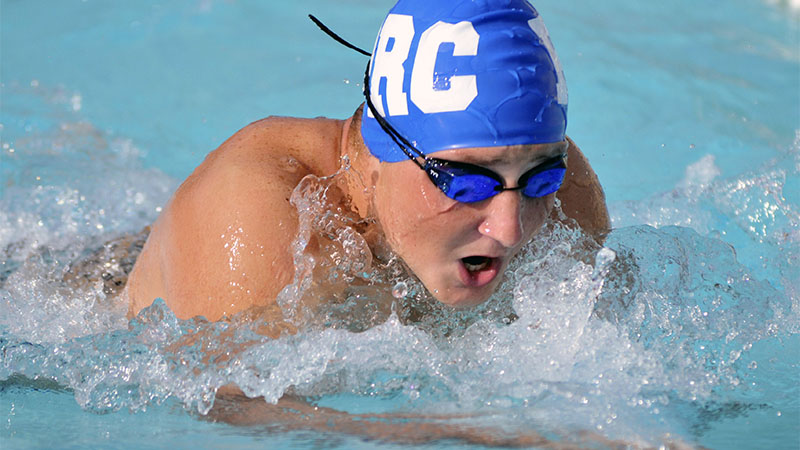 That’s a quick turnaround for a sport like swimming, but Head Coach Blake Rutherford said that his athletes performed well even with the minimal rest.

“I was really impressed with our veteran, senior swimmers,” Rutherford said.

“They showed great leadership in taking the new kids under their wings.”

PRC competed against Gulfport, and as a team the girls were defeated by Gulfport with a score of 106 to 63.

However, the boys team was able to defeat the Admirals with a score of 113 to 58.

Within the group event, there were some individual standout performances.

Sophomore Amber Bounds won the 200-yard individual medley and 100-yard freestyle for the PRC girls, and was the only swimmer to score in those events for the Blue Devils.

“She’s just a sophomore, but she’s a leader for the girls team,” Rutherford said.

On the boys side, Jared Bryson wasn’t feeling well, but still pushed through the discomfort to compete in the 100-yard fly and 200-yard individual medley.

Freshman team member Jake Rogers, and 10th grader Bryson Matthews also stepped out of their comfort zones with Rutherford having them participate in the 200-yard individual medley. Those are long events for young swimmers to compete in, and Rutherford said that the conditioning of the Blue Devil swimmers is what makes them stand out.

“We swim enough to be able to pull through at the end and pass people at the end when other people are fizzling out.”

The team has been conditioning for meets while still missing significant practice time due to inclement weather, which Rutherford said was another indication of the hard work of his athletes.

The swimmers were also constantly cheering for not only their teammates, but for other swimmers from competing schools.

Rutherford said that’s a unique aspect of swimming not found in any other sport.

“That’s what is so cool about swimming is that it’s a community,” Rutherford said.

“My team, especially at home meets, (is) expected to cheer for teammates, and if there’s another swimmer by themselves then they need to cheer for someone who needs that support.”

With it being a home meet held at  Millbrook Golf & Country Club, the athletes were comfortable at the venue.

“There’s a comfort for them being in their element,” Rutherford said. “I don’t think it’s nerve wracking at all, but it’s exciting to know their teachers, parents and friends can see how hard they’ve been working.”

The team’s next meet will be against Pass Christian and Long Beach on Sept. 5 at 5 p.m., and Rutherford is expecting his swimmers to win. “It’ll be our first look at strictly class one division schools,” Rutherford said.

“I expect us to be on top in both boys and girls this meet.”