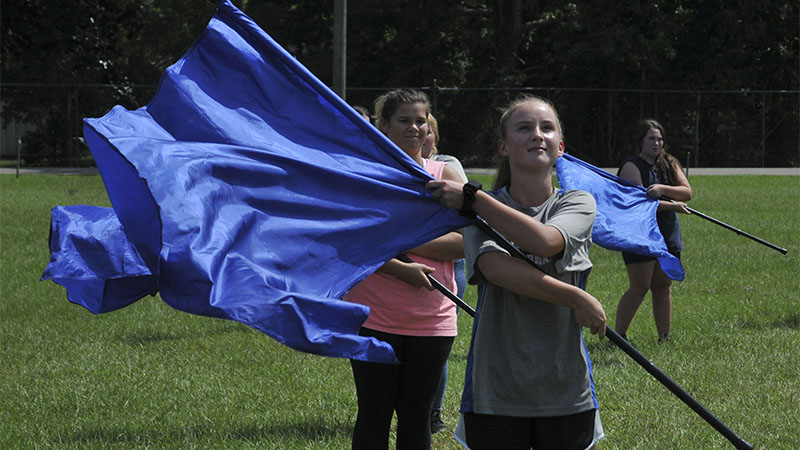 Jonathan Mitchell | Picayune Item Training day: The Pearl River Central High School color guard will use their flags and other props to tell the story of the show as the band plays the music for the performance.

In the sweltering heat, members of Pearl River Central High School’s color guard stood in formation on a practice field with dancers scattered out amongst them.

The athletes didn’t seem to mind the weather, and instead were focused on Color Guard Director Haley Jones’ directions.

The group was working on a specific routine that will be used in this year’s halftime show, and Jones said that the dedication the girls have to their work is what will push them to new heights.

“They’ve been super passionate about everything,” Jones said.

“They love it, and they’re excited.”

Jones said that last year the squad struggled with transitions between songs during shows.

However, Jones said she’s noticed improvement in that aspect of the performance, and that progression should help during competitions.

“This year that is what’s going to push us forward, the movements will be really smooth and the music has helped with that.”

The guard works in tandem with the band, and so the musical aspect of the show can determine how a routine will look.

Due to that close working relationship, it’s been beneficial for both programs that Jones and Band Director Kelcey Becnel work so well together.

“We bounce ideas off one another and work as a team, that’s the reason why the program is becoming successful,” Jones said.

Both directors are alumni of PRC, and Jones said that working in a program that so heavily influenced her life is special.

“To know I’m a part of something that changed me and shaped me is very rewarding,” Jones said.

The impact the color guard program had on her is exactly what she’s trying to give her students today.

She wants them to have fun and learn about the guard, but she also wants them to take the lessons they learn with them after they leave.

“We’re trying to prepare them for life,” Jones said.

“The main thing I’m trying to teach them is that things are hard, but that they can do it if they work hard enough.”

That work pays off when an athlete gets a toss right, or perfects a movement and Jones said it’s rewarding to see that as a director.

Color guard teaches athletes a variety of skills, and that’s why Jones said it’s important that these opportunities are available to students.

“They’re going to learn stuff about themselves that only this can teach them,” Jones said.

“These programs shape students, and help push them to college.”

Along with these opportunities come expectations, and Jones holds her athletes to high standards.

She knows that the learning curve is tough, especially for freshmen, but she always wants to keep pushing her squad to get better.

“We set our expectations super high, always, because we don’t ever want to tell the kids if we don’t get a routine we’ll change it,” Jones said.

“It’s ok to struggle, but let this be your outlet.”