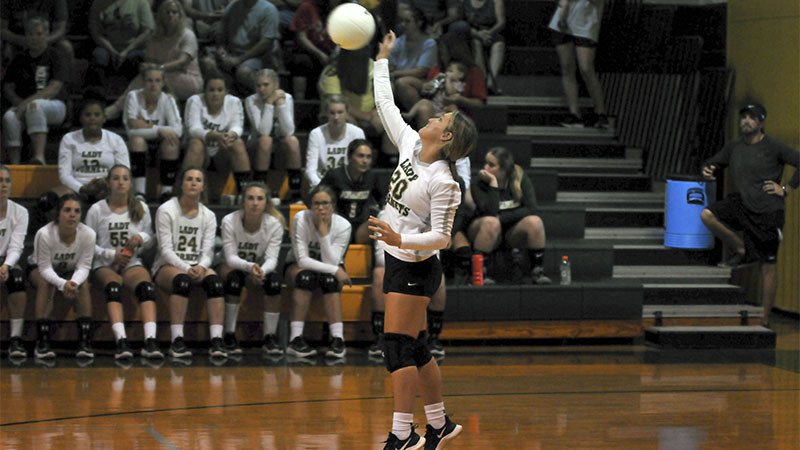 Jonathan Mitchell | Picayune Item Aces all around: Serving played a key role in Poplarville defeating Lumberton, and it’s an aspect of the game that Head Coach Jonathan Ray has his athletes work on every day.

Poplarville’s volleyball program is in its first year, and because of that Head Coach Jonathan Ray said the goal for his athletes is to just learn the game.

That means in practice he has his athletes run through a variety of drills focused on improving the players’ fundamentals.

Those practice sessions have paid off, with the Hornets emerging victorious against Lumberton.

During the first set, Poplarville dominated with a score of 25-16.

Strong serving and good offensive plays helped the Hornets jump to an early lead, and they never let up.

However, Lumberton wasn’t going to go down without a fight.

The second set was a tense affair with Lumberton doing a better job of handling the Hornets’ serves.

Some communication errors also hurt the athletes in the second set with multiple points being lost just because of a breakdown in communication concerning which player was going to get the ball.

Lumberton was able to take advantage of those mistakes, and won the second set 27-25.

The Hornets bounced back from the close loss, and won the following two sets with the final score of both sets being 25-13.

The gym was filled with fans for the Hornets, and there were also numerous students who came out in support of the volleyball team to fill out the student section.

With the win, it showed that the hours the athletes and Ray put in on the practice court led to the team’s improvement.

“We need to understand alignments and strategies and learn the game because it’s brand new to all of us.”

The crowd also played its part in the Hornets’ victory, and it was the kind of backing Ray expected from the community.

“I was expecting the fan support,” Ray said.

“It’s exciting and it’s a new thing, so they feed off the energy.”

Now the players will have a couple of days to practice on the things that need improving.

Poplarville’s next game is against Purvis on August 22, and it will take place at Poplarville High School at 6 p.m.

It’ll be the team’s first division game, so it’ll serve as a measuring stick to see how the squad stacks up against division rivals.

After that game the squad will have a whole week of practice before again playing August 29 against Perry Central at 6 p.m.