Poplarville band approaching the year with a new mindset 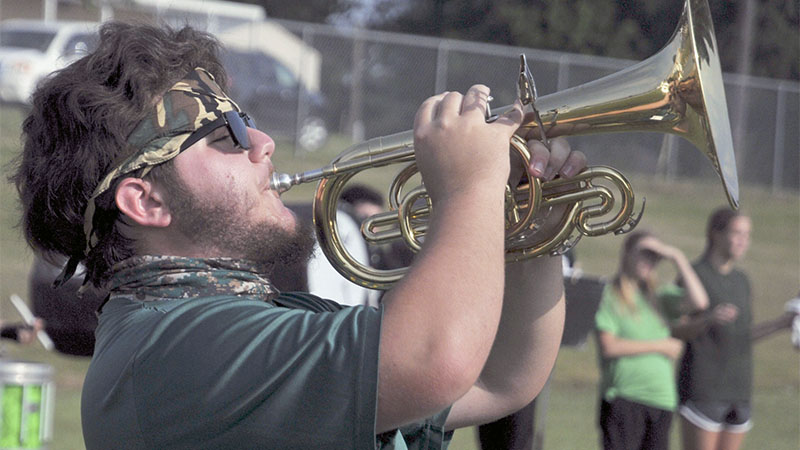 Jonathan Mitchell | Picayune Item Others take note: The Poplarville High School band also includes a set of five members from the color guard who perform with the band at football games and band competitions.

The block of students was perfectly formed with woodwinds and brass interspersed in the drill design, while those with percussion instruments were situated only a few feet behind.

Poplarville High School’s Band Director Josh Tidwell issued commands with a forceful, yet respectful tone as he set his students working on a number of formations they’ll use in upcoming performances.

The sun was hidden behind the clouds, but that didn’t stop the heat index from nearing 100 degrees as the band students continued to practice.

Not a single complaint was heard from the musicians, and when it was time to head inside there was still work to be done.

“Their drive and determination for it has improved,” Tidwell said.

“We’ve started getting back into our superior range.”

That level of performance has landed the band in the state championships the past couple of years.

However, with the football team making it to the state championship game last year as well, Tidwell said the grind of the long marching season began to wear on the students.

“It ate away at some of the enjoyment after awhile,” Tidwell said.

“When you start focusing on scores the kids start getting nervous.”

To combat this, Tidwell has shifted his focus to what judges would be looking for; the musicians are only pursuing self-improvement.

The new attitude has improved the atmosphere as a whole for the program, and Tidwell said it’s made the experience more enjoyable.

“When it comes to their attitude with the marching they were focused, but they were also relaxed,” Tidwell said. “They were working harder than ever before, but didn’t notice it.”

The program has upped the ante when it comes to the musical aspect of the show, and this year’s musical pieces will be more difficult than last year’s.

In combination with simplifying the marching routine, Tidwell said the students have adapted to the changes.

“For the most part so far the attitude of the group this year has been significantly better, they don’t seem to be on edge or as tense,” Tidwell said. “It’s been a lot more enjoyable this year for the kids to not be worrying about what the judges would say.”

Because Tidwell is having his musicians instead focus on bettering themselves, he said he’s emphasized the importance of being team oriented.

“Band teaches the individual that when you work with a team you as an individual are not more important than the group,” Tidwell said.

“If you don’t sacrifice your own wants and needs, you’ll be a weak link for the group.”

Tidwell said he’s spent more time teaching teamwork and leadership than music and drills because he thinks those components are more important. As the band director, he wants to help shape the young men and women into better people, and he said that band is the perfect place for students to learn and grow.

“Band develops the creativity side, which creates a well-rounded individual,” Tidwell said. “That’s what people in the workforce are looking for. If you can’t work with people then there’s no way you can be a leader.”