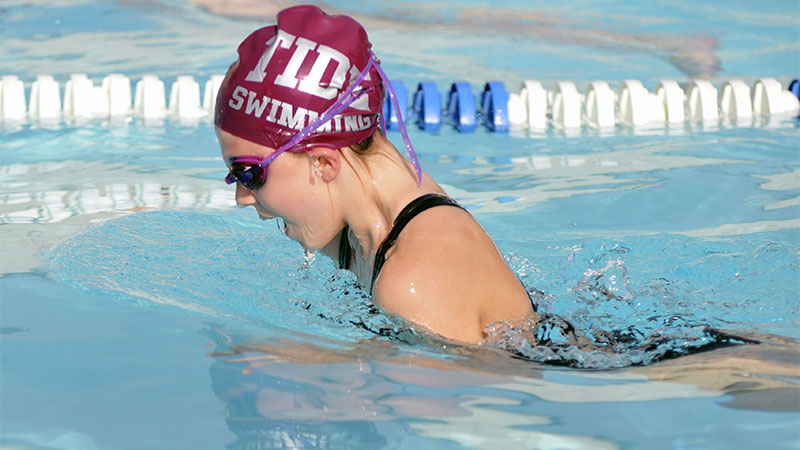 Jonathan Mitchell | Picayune Item Self motivated: Seventh grader Heidi Hill competed in multiple events during Tuesday’s meet for Picayune’s swim team in order for the girls team to win as many points as possible against their opponent West Harrison.

The Picayune Memorial High School swim team took on West Harrison Tuesday evening at Millbrook Golf & Country Club in their second meet of the season with the boys losing 71-25 and the girls winning 85-39.

It was the second meet in four days for the squad, but the Millbrook Golf & Country Club pool served as home turf for the athletes.

So many people came to watch the athletes perform that there was hardly any room outside the pool for the coaches to maneuver.

In the water was where the action was happening, and Head Coach Rachael Rutherford said that her team is showing it can compete against bigger teams.

“Our team even though it’s small, it’s mighty,” Rutherford said. “It’s really cool because they’re willing to do their best and swim whatever I ask them to. They’re starting to trust me as a coach.”

Being able to swim at the squad’s home pool meant that the athletes had an opportunity to show off for friends, teachers and family members.

However, Rutherford was worried that being so familiar with the environment might backfire for her athletes.

“I was honestly just a slight bit nervous because it’s so comfortable to us,” Rutherford said. “Would they have all of their friends there and not pay attention? But in the end it helped us more because they had support.”

Rutherford said that support led to standout performances from her swimmers.

Seventh grader Heidi Hill was tasked by Rutherford to swim the 500-yard freestyle race only 30 minutes before the race.

“She’s such a go-getter and very into it,” Rutherford said.

Eighth grader Thomas Lawrence was another swimmer who caught Rutherford’s attention with his performance.

During the meet Lawrence swam the 200-yard freestyle for the first time in his career, and was able to get some points for the Maroon Tide with his performance.

“He is just such a natural swimmer,” Rutherford said.

“He’s a good competitor, swims pretty fast, and did a wonderful job.”

Sophomore Kylie Burnette was able to qualify for the South State Meet with a time of 1:29:16 in the 100-yard fly. Because of the number of athletes Burnette ended up having to swim the event by herself, but Rutherford said Burnette didn’t need other swimmers in the water to motivate her.

“She’s awesome at pushing herself and 30 minutes later she swam her 500 freestyle race,” Rutherford said.

Now that her athletes have two meets worth of experience, Rutherford said nervousness won’t be an issue for them again.

“Now they’ve done it all,” Rutherford said. “Now it’s just trying to get them to swim to the best of their abilities.”

The team’s next meet will be the West Jones Invitational on September 14, and Rutherford is going to use the time between meets to have her athletes become well-rounded swimmers.

“My goal is to have them swim things other than the 50 or 100 free,” Rutherford said. “We’re getting the easiest ones out of the way now because I want them to get a little more advanced.”