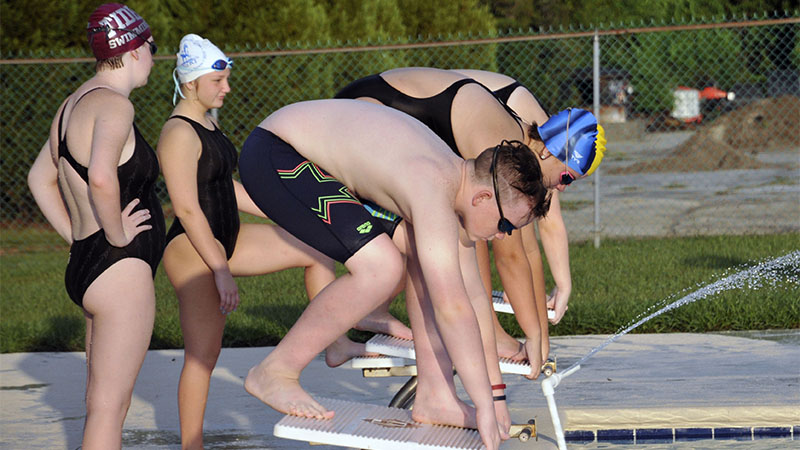 The sun was still rising on the horizon as Picayune Memorial High School’s swim coach Rachael Rutherford and her athletes went about their normal practice routines.

The squad meets Monday through Friday, with practices usually lasting from 6 a.m. to 8 a.m.

Going into the year, Rutherford wasn’t sure how many swimmers she’d have on the team.

To get more people to join the program there was a donut party hosted where interested students could come out and learn about swimming.

Rutherford said the party was a success, and that she was able to get six more swimmers to join her team because the party piqued their interest in the sport.

Rutherford also said that community engagement on the team’s Facebook has increased dramatically.

She hopes that means in future years the size of her team will continue to grow.

“The support is out there, it’s just so new,” Rutherford said.

“It all happened so fast and I didn’t have time to put it all out there quickly.”

Now that she has a full squad, the practices have been a mix of working on technique and conditioning.

There are a couple of returning athletes who understand what it takes to be successful at a swim meet, but for the newer swimmers the learning curve can be steep.

The two goals for Rutherford during practice sessions is to improve the athletes’ endurance, and teaching them the technicalities of the specific strokes.

“All the kids swim so great naturally that the only challenge is conditioning,” Rutherford said.

“I’m trying to get them to the distance that we need.”

As theseason progresses Rutherford will also spend more time with the newer swimmers going over the strokes and how to properly do them.

If an athlete were to do a stroke incorrectly, or even just stand in the pool to rest, they would be disqualified at a meet.

“We’re going to swim well, it’s just the nitpicky things that are just so new to being in a meet,” Rutherford said.

“Eventually by the end of September hopefully we have it evened out and know the small things.”

“This team already has just amazed me so much because they’re all supportive of each other and caring,” Rutherford said.

“They take care of each other, which is really awesome.”

For Rutherford, the camaraderie was the best part of being in the swimming program when she was in high school, and she’s glad to see the athletes helping one another.

“That was my favorite thing about swimming is the community,” Rutherford said.

Not only does Rutherford see the team performing well this season, but she also has high hopes for the future of the program.

“I have 9th and 10th grade girls, and they do awesome with their relays,” Rutherford said.

“They have a lot of potential and so I know in a couple of years we’ll be a powerhouse.”

The support from the community and school has been there for Rutherford and the swim program.

The athletes get what they need in order to succeed, and Rutherford appreciates the helpful nature of those involved with the program.

“The booster club is amazing, we’re ordering swimsuits and getting a banner and want to get a tent,” Rutherford said.