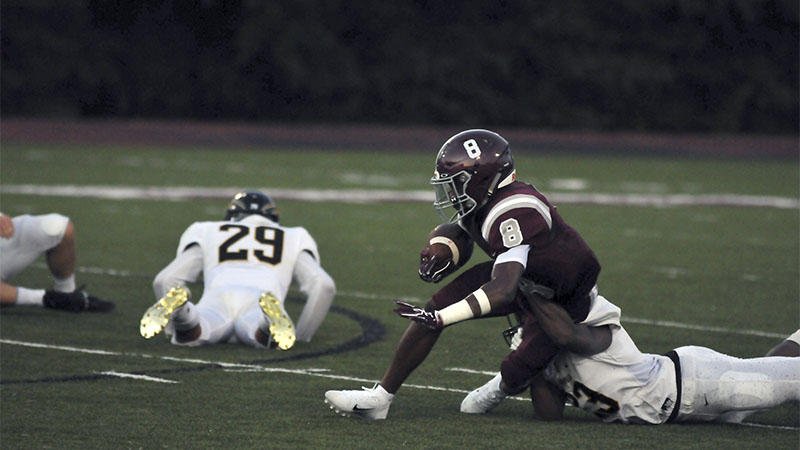 Jonathan Mitchell | Picayune Item Ground and pound: A D’Iberville defender holds on for dear life as running back Cameron Thomas rushed forward for a gain of three yards.

The Maroon Tide was explosive on the offensive end of the ball, and never let up throughout the entire game. Picayune started fast, driving the ball from their own 27 to the Warrior’s 12-yard line. It was 4th and 10, but the Maroon Tide kept their cool as quarterback Jakail Myers lofted pass to wide receiver Jaylen Hall in the end zone with just over five minutes remaining in the first quarter. After getting the ball back with only two minutes left in the quarter, running back Jaylen Hall ripped off a 60-yard touchdown run.

The point after attempt was unsuccessful, but the Maroon Tide was up 13-0.

The Maroon Tide defense was smothering the Warrior’s offense all night, and Picayune quickly got the ball back. The offense then drove down the field with 11:45 left in the second quarter, and running back Cameron Thomas capped off a long drive with a 2-yard touchdown run.

Leonard Taylor ran a wide receiver sweep in for the two- point conversion, and the Maroon Tide had a commanding 21-0 lead.

They weren’t going to stop there. Another stop by the Picayune defense led by defensive tackle Elijah Jenkins, and the Maroon Tide were again driving to the end zone.

The drive covered 80 yards and was capped off by another touchdown run from Thomas. The point after attempt by Austin Samples was good, and the Tide were piling on the points, leading 28-0 with 4:53 left in the second quarter.

A penalty call for a blindside block against the Warriors during their ensuing offensive possession stalled them deep in their own territory. Once the Tide had the ball back, it only took them a couple of minutes before Cameron Thomas exploded down the right side of the field for a 60-yard touchdown run.

The following kick was no good, and now Picayune was running away with the game. They would head into halftime with a dominant 34-0 lead. D’Iberville would put up a fight in the second half with the Warriors’ quarterback Jaden Walley finding wide receiver Justin Walley in the back of the end zone with a pretty pass. The score was now 34-6. The Maroon Tide was once again in scoring territory late in the third quarter, but a fumble by Austin Samples was recovered by the Warriors.

The defense had played well all game, and was able to contribute points to the board when Jaylen Hall recovered a fumble and took it to the house to give the Maroon Tide a 41-6 lead with 10 minutes to go in the fourth quarter.

The Tide would comfortably keep that lead until the final whistle sounded. Head Coach Dodd Lee said that he and his staff knew Thomas would be an impact player for them.

“We knew he was going to be special,” Lee said. Lee also said that while it was great to start the season with a win, the team still needs to improve.

Pride of the Tide look to build off first…