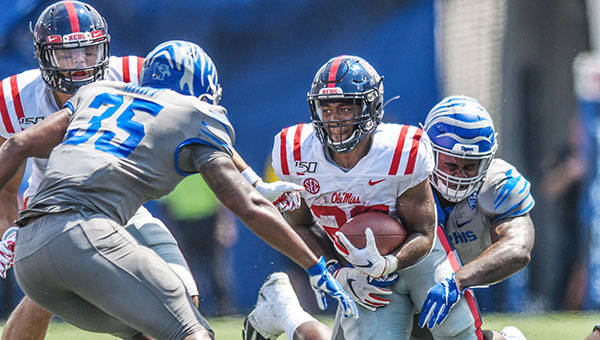 On Saturday, the roles were reversed with a much-improved Memphis defense stifling Ole Miss, leading the Tigers to a 15-10 victory in the season opener for both teams.

The Tigers held the Rebels to 173 yards of offense, including minus-1 yards rushing in the first half. But it was a fourth quarter safety by Memphis defensive end Bryce Huff that sealed it. On first down after Tiger punter Adam Williams pinned the Rebels at their own 2, Huff busted through to tackle Corral as he dropped back to pass in the end zone.

That gave Memphis its final 15-10 margin with 6:32 left. The Rebels never got the ball back after the ensuing free kick and Memphis ran out the clock with a six-plus-minute drive.

“That’s something I’ll remember for a long time,” Norvell said of closing out the game. “This football team trains, prepares itself. This team plays a top-notch, physical football game here in Memphis.”

Patrick Taylor rushed for 128 yards and a touchdown to lead the Memphis offense. Kenneth Gainwell, who has taken over the Tigers all-purpose duties from Tony Pollard, now with the Dallas Cowboys, had 77 yards rushing for the Tigers and six catches for another 41 yards.

Corral finished the game 9-of-19 passing for 93 yards. Scottie Phillips managed 62 yards on 19 carries as the Rebels were held to 173 yards of total offense.

“We just have to settle (Corral) down, he has a lot of ability, a lot of talent. I think he was pressing today, trying to make things happen early. We just have to settle him down,” Ole Miss head coach Matt Luke said. “We have some weapons, but we have to find a way to get them the ball in space to stay on track and stay out of negative plays. He pressed a bit early on in the first half. We weren’t in sync, so he was pressing, I think he forced a ball in there that got picked off by the safety. Again, there are a lot of things we can do as coaches to put these guys in a better position to make plays, and we will.”

The Rebels, unveiling a new offense under coordinator Rich Rodriguez, failed to convert their first seven third-down plays and only managed one conversion in the game.

“We struggled to block them, we struggled against the movement. At times, early on, there were a couple of bad decisions. We stayed behind the chains, couldn’t get anything going. In the second half, we limited the negative plays a little bit more,” Luke said. “Obviously, getting backed up and giving up a safety, you’ve got a chance to drive down and win the football game right there, or at least flip field position, at worst. Our defense kept us in it for the whole game, they looked like a much-improved defense. We have a lot of growing up to do offensively.”

That was an important factor for the Tigers, according to Norvell.

“We knew coming into it that whoever would be able to establish the running game would put themselves in a position to be successful,” Norvell said. “You look at it, we rushed for almost 200 yards, they only rushed for 80. That was a big part of the game.”

“At times, early on, there were a couple of bad decisions,” Luke said of the first half offense. “We stayed behind the chains. Couldn’t get anything going. In the second half, we limited the negative plays a little bit more.”