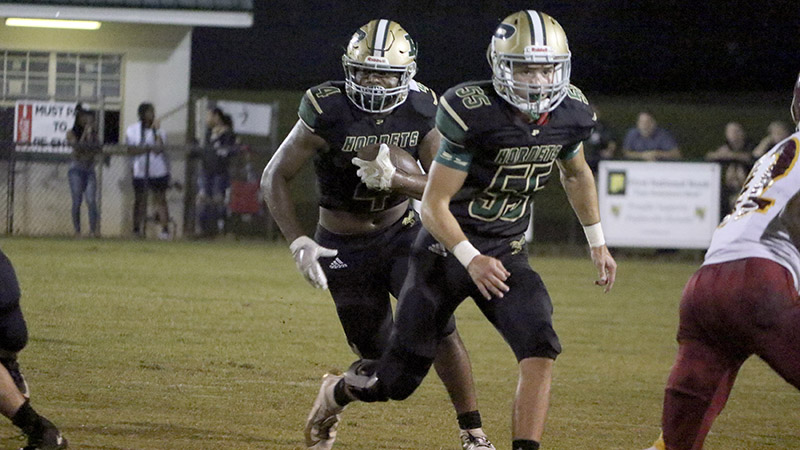 In a game decided by margins, it’s no surprise that the game between Poplarville’s Hornets and Laurel’s Golden Tornadoes came down to the wire.

Both teams were stout on the defensive end, with Hornets linebacker Zac Owen making several key tackles during the game.

However, neither team was able to really find its groove offensively.

The Hornets struggled running the ball against a fast Laurel defense, and the first quarter ended with the teams tied 0-0.

That changed in the second quarter after the Hornets were able to put together an impressive offensive drive that ended with a score by D.J. Richardby from the one yard line.

The point after touchdown attempt by Zach Carpenter was successful, putting the score at 7-0.

Laurel responded quickly with a touchdown run by Xavier Evans from the five, but after an illegal shift penalty pushed back their extra point attempt by five yards, the Hornets pounced on the opportunity and blocked the kick by William Mora.

Heading into halftime it was anyone’s game with the score a tight 7-6 in favor of the Hornets.

The second half was a fast paced affair with teams trading big plays and turnovers.

Eventually Poplarville broke through the gridlock with an 83-yard touchdown run by Chase Shears.

Now ahead 14-6 after a successful PAT by Carpenter with only a few minutes left in the 4th quarter, it appeared as though Poplarville would start the season with a win.

But a drive by the Golden Tornadoes from their own 18 yard line ended with a 15 yard touchdown pass from Evans to Jamison Jones.

The two-point conversion was good, and now the game was tied 14-14 with only 2:28 left on the clock.

Humid weather conditions possibly contributed to numerous fumbles by both sides and it was a fumble that would be the defining play in the game with just 2:28 left on the clock.

Having just scored, as the Golden Tornadoes kicked off to the Hornets, Poplarville muffed the kick and the ball was recovered by Laurel.

A few plays later the Golden Tornadoes would seal the win with a touchdown run by Evans from the two yard line that put the visiting team up 21-14 with only 1:37 remaining in the game.

The Hornets tried valiantly to quickly drive down the field for another score, but were stopped near midfield.

Head Coach Jay Beech gathered his players after the loss for a post game speech.

Following a few words he bowed his head and led his players in prayer before the team began dispersing.

Beech said he knew the conditions were the same for both teams, and hopes that in the future they’ll be able to better take care of the ball in wet conditions.

The Hornets will head back to practice before facing hometown rivals Pearl River Central High School’s Blue Devils next Friday. Kickoff is at 7 p.m.