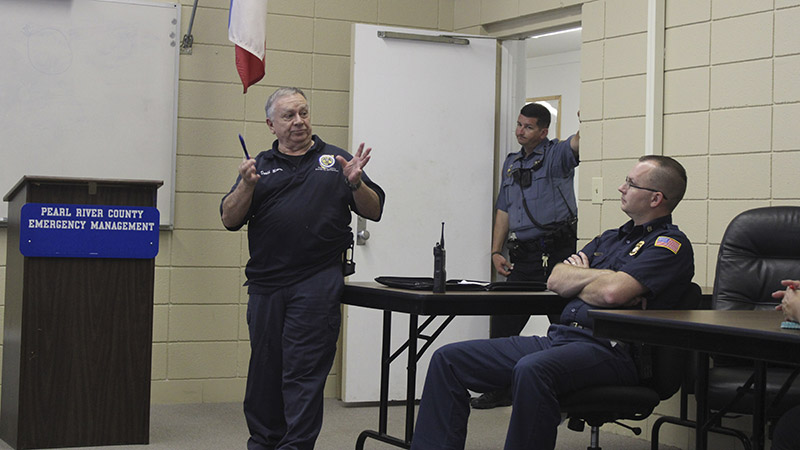 David Moore discusses the importance of MISWIN radios at a hurricane staff planning meeting Thursday. The EOC holds the meetings once a month during hurricane season.

The Emergency Operations Center focused on the importance of MSWIN radios at its third hurricane staff planning meeting on Thursday.

The exercises presented potential scenarios that could occur during an emergency—such as how the Picayune Police Department might respond to a stranded bus of evacuees that had no fuel or food—and asked participants to think of ways to respond to the scenarios and determine what resources they would need.

During an emergency, the EOC can request resources from state and federal agencies that can be used by local agencies, said EOC Deputy Director Shawn Wise.

EOC Communications Officer David Moore encouraged everyone to acquire MSWIN radios. The statewide radio system allows agencies to communicate with each other during an emergency, Moore said.

Many agencies, including the Sheriff’s Department and the Picayune Police Department, already use MSWIN radios. Moore asked everyone to practice using the common channel on a regular basis, so representatives with those agencies will be familiar with reaching the EOC during an emergency.

The EOC is trying to acquire a cache of MISWIN radios for large emergency situations, Manley said.