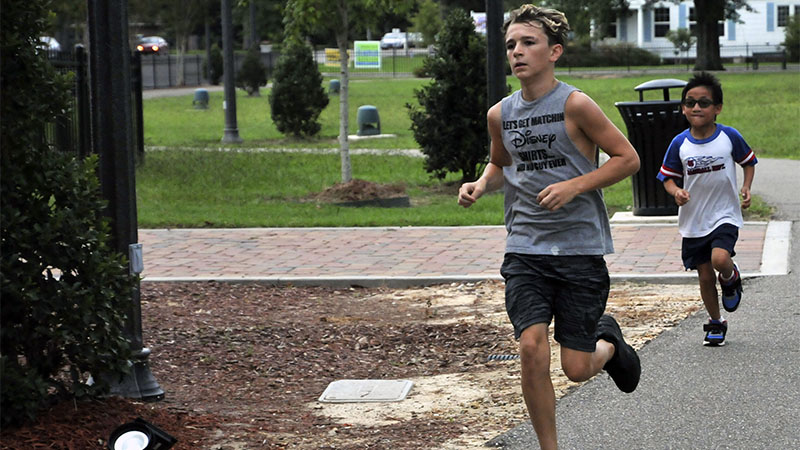 In endurance sports like long distance running, mental strength is just as important as physical fitness.

The runners are not only having to train their bodies to handle the miles, but are also having to develop mental strategies to fight through adversity.

Heritage Christian Academy’s Track Coach John Stricker knows the importance of the mental aspect of running, and that’s why his athletes work out as often as they can.

His athletes are young, but talented; Dallas Stricker and Kaylee Collier both placed at the state track finals in long distance running.

The two runners are heading into 7th grade this year, and have been defeating competition in their age range and running against high school aged competitors in some meets.

Stricker said that it’s important for parents to be supportive of their athletes in these situations because parental support can help a young person accomplish anything.

“With the support of the parents it helps the talent blossom,” Stricker said.

Another key component of long distance running is conditioning. Stricker likens it to building a house; if the runners put in the work now, then come competition time they’ll have a good starting point.

“You can run anywhere and later on when the conditioning is there it’s a strong foundation,” Stricker said. “Your cornerstone is there and you can just build on it.”

Another interesting aspect of running in comparison to other athletics is that athletes don’t need to find others in order to participate in the sport, and they can do it anywhere. The accessibility of the sport and health benefits of it has Stricker hoping more athletes join his track and cross country teams.

“Running, you can come out here by yourself or do it with your family,” Stricker said. “Running is something you can do your whole life.”

Running anywhere is exactly what Stricker and his son Dallas have done, visiting 17 states in order to let Dallas participate in competitions in places as far away as Hawaii.

The sport also teaches the athletes lessons that they take with them when they’re not putting in miles.

“It teaches them to treat their body like a temple,” Stricker said. “I want running to be a lifestyle.”

Even with the work put in, Stricker says it’s still important to let the athletes have fun and reward them for their effort.

Whether it’s eating as a team at a restaurant after a meet, or getting smoothies for a post workout treat, Stricker wants his runners to enjoy the sport as much as he does.

Collier and Stricker’s son Dallas already hold a number of state records when it comes to times, and he hopes they continue to improve upon their performances along with the rest of his athletes.

“They’re only going into 7th grade, and have been competing against high school runners in meets,” Stricker said.

“Because of that we aren’t in any rush, we have time to improve.”