Changes to the county animal control ordinance are in effect 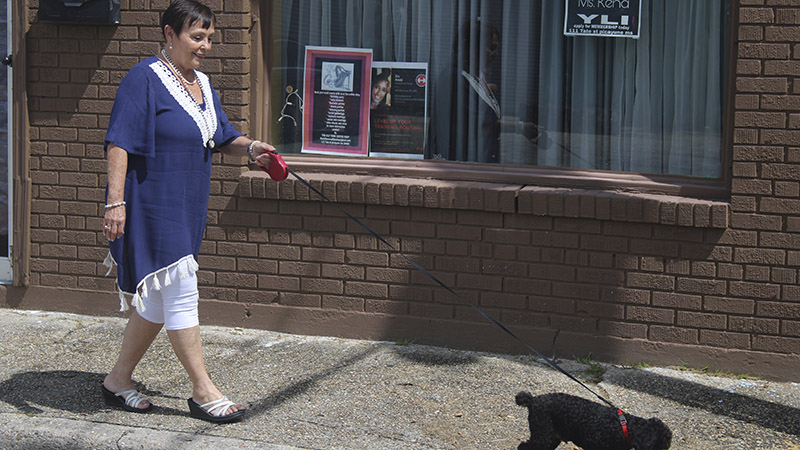 Marlene Miele takes her dog Max for an afternoon walk Friday. County animal control ordinances have changed to distinguish between the different outdoor shelter needs of pets like Max and livestock.

Changes to the county animal control ordinance that affect the requirements for sheltering livestock and the selling of chicks and ducklings are now in effect.

The Pearl River County Board of Supervisors changed the section of the ordinance concerning livestock, which includes horses, cattle, swine, sheep or other domestic animals, that are produced for profit. With the change, those animals are now defined in the separate category of livestock. The Board also changed the definition of adequate shelter for a pet.

The changes are intended to exclude horses and cows from the section of the ordinance defining adequate shelter, said County Administrator Adrain Lumpkin. The previous wording in the ordinance meant everyone with a cow or horse would need a three-sided shelter for their livestock every time it rained, which is not feasible, Lumpkin said.

The changes make it clear that the requirement for adequate shelter to protect from wind, water, heat and cold is intended for pets, such as cats and dogs, Lumpkin said.

The Board also eliminated a requirement that chickens or ducklings younger than eight weeks had to be sold in quantities of at least 10.

Businesses in the county already sell chickens or ducklings in smaller quantities than 10, Lumpkin said, and the Board did not realize that section was in the ordinance and felt it was outdated.

The Board also eliminated a section of the ordinance that prohibited giving away live animals or fish as prizes in contests or games.

The changes are intended to clarify outdated sections of the ordinance, Lumpkin said, and make it easier to enforce.