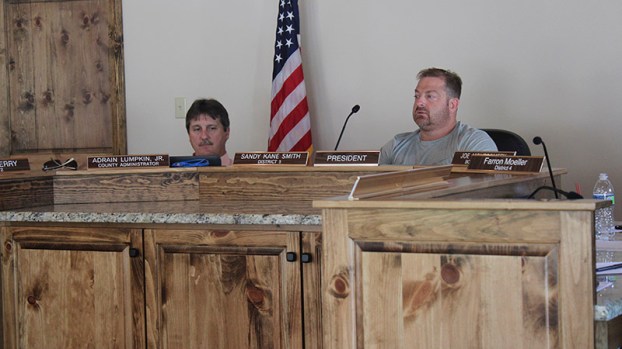 The Board of Supervisors discuss different options for county IT services in the upcoming fiscal year at a budget workshop Monday. The Board met in the new annex building. Photo by Cathy Cook.

Pearl River County’s Board of Supervisors discussed hiring a county employee for some IT services in the 2019-2020 fiscal year during a budget workshop held Monday.

The Board reviewed three proposals for IT services in the 2019-2020 fiscal year during the budget workshop.

All three plans include approximately $30,000 for equipment purchases in the next fiscal year. Lumpkin said he believes the majority of necessary equipment updates have already been done. The county will need to buy a new time system soon, Lumpkin said, and the new consolidated dispatch will require a temporary increase in labor for IT services.

All three plans also include $80,000 for other costs, including office supplies, equipment and telephones. The difference in the cost of the three plans includes contractual services and the cost of potential county employees and their benefits.

One plan proposed hiring two county employees, at an annual cost of $206,050 and continuing to pay for oversight from a contractor for $75,000. The total budgeted cost for the plan was $391,050.

The second plan proposed continuing to contract for IT services with no county employees, as the county has done in the current fiscal year, with a budget of $400,000 for contractual services. The total budgeted cost for the plan was $510,000.

The third plan proposed hiring one county employee, at a cost of $103,350, and contracting for services from one employee and oversight for $265,000. The total budgeted cost for the plan was $478,350.

The Board expressed interest in the third plan and discussed who would be available to work for the county.

The Board also discussed the costs associated with the consolidated dispatch. The current plan is to also purchase a new records management system and a new jail management system from one vendor, Lumpkin said, which would cost more than $1 million for five years. However, that cost would be shared between the county, and the cities of Picayune and Poplarville, Lumpkin said.

Purchasing the systems from the same vendor would ensure information entered by dispatchers would be shared with the systems used by local law enforcement officers, Lumpkin said. That link between the two systems would make the job of officers easier because after they conduct an arrest the information collected by dispatch would already be in the system while booking the offender into the jail, or when the officer writes their report, Lumpkin said.

The other benefit of purchasing records management and jail management systems that automatically share information with dispatch, is that during a countywide emergency, like a hurricane, one dispatcher could go to the Emergency Operations Center and enter information that all county law enforcement would be able to access, Lumpkin said.