Board of Supervisors approves grant application for work on airport 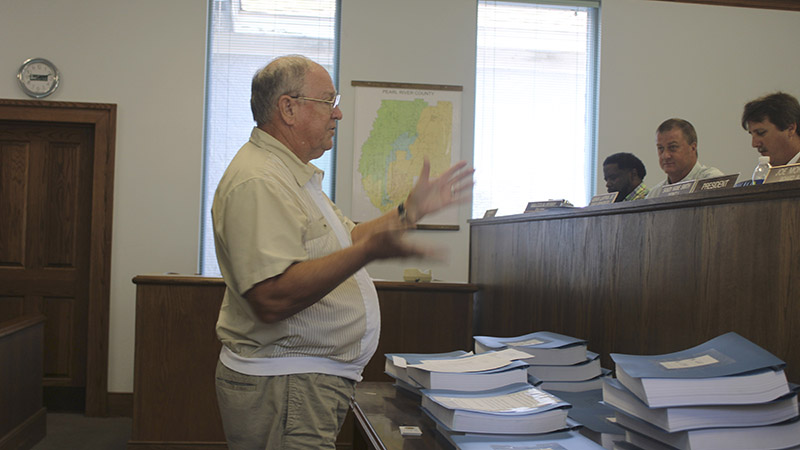 Airport board member Darrell Fuller updates the Board of Supervisors on a grant application for drainage work at the Poplarville-Pearl River County Airport at the Board meeting Monday. The grant would require five percent matching funds from the county and Poplarville.

The grant would require a five percent match split evenly between the county and the city of Poplarville, said Airport Board Member Darrell Fuller.

The airport’s grant application was previously rejected because it included a request for a fuel farm replacement as well. Now, it is being resubmitted without that request, Fuller said. A new pump system has already been installed, using $30,000 from the Mississippi Department of Transportation, Fuller said.

The Poplarville Board of Aldermen also signed the grant agreement at their meeting Tuesday.

In a separate matter, the Board of Supervisors approved a change order for an additional $12,000 for construction on County Farm Road to purchase and haul additional materials to the site, said County Engineer Les Dungan.

Dungan also informed the Board that three grant applications for money from the Gulf Coast Restoration Fund were submitted Friday. The applications are for an aviation training facility, property for an industrial site in the county and work on the northern portion of Ridge Road, Dungan said. During a previous meeting held on July 29, the Board authorized the applications and committed to a 20 percent match should the funds be awarded.

Dungan also informed the Board he is waiting on a response from Norfolk Southern, who committed to reimburse the county for damage to the edges and shoulder of Hillsdale Road between Highway 11 and Highway 59. The damage was caused by work trucks removing debris from the train derailment that occurred in May due to heavy rains, Dungan said.