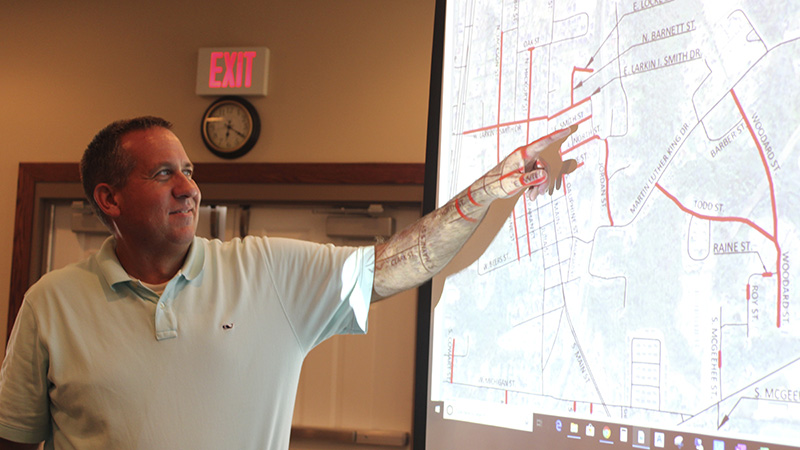 Jason Lamb of The Walker Associates points at a map highlighting streets being considered for paving in the 2019 Road and Bridge Bond Program during the Board of Aldermen special meeting Wednesday. The Board narrowed the list of streets to pave in the project during Wednesday’s meeting.

The Poplarville Board of Aldermen created a new list of prioritized roads to be paved under the 2019 Road and Bridge Bond Program during a special meeting held Wednesday.

The Board previously rejected bids for asphalt and paving, because it wanted to award the bid for drainage work first, according to previous coverage. The Board created the new list of prioritized streets to be paved in order to advertise for asphalt, said City Clerk Jane O’Neal. The Board will solicit bids for asphalt later this year, O’Neal said.

The bond is for $1.3 million, said Jason Lamb of The Walker Associates. The Board has roughly $600,000 left to spend on asphalt, after taking out the costs of program development work, design and engineering, legal services, right of way platting for Martin Luther King Jr. Drive, and the contract for drainage work, said Lamb.

The Board had to cut some roads from the list established previously to reduce the cost as a result of increasing asphalt prices. The total engineer’s estimate for the previous list of roads was $725,233. The Board added W. Beers Street and sections of Martin Luther King Jr. Drive and S. Haynes Street to the project, because of the drainage work planned for those streets, Lamb said.

The list also includes at least two alternates—N. Barnett Street and N. Hickory Street—which would be added to the project if the other roads are paved under budget, Lamb said.