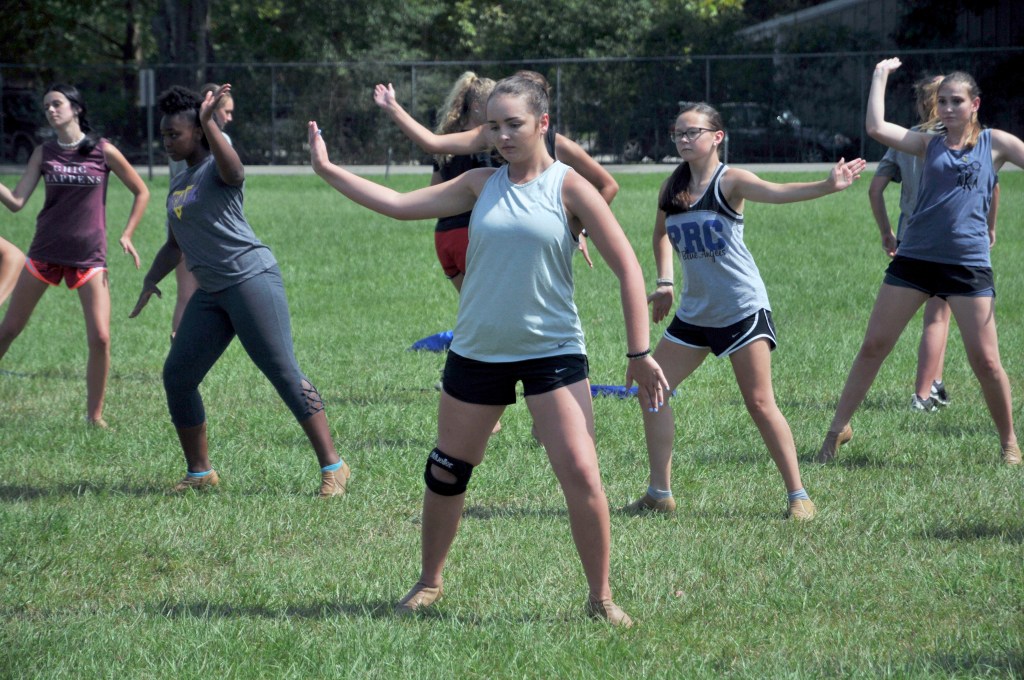 Jonathan Mitchell | Picayune Item First year intensity: The Blue Brigade Dancers will have to learn a variety of routines that will be performed at band competitions and football games. To prepare, the squad spends many hours outside in the heat perfecting the routines.

This will be the first year that Pearl River Central High School will have a dance crew solely tied to the band.

The Blue Brigade Dancers are set to embark on a new journey during the program’s inaugural season. The group will compete with the band at all competitions, and also perform at the varsity football games.

Director Kristi Smith leads the squad, and they’ve been hard at work during the summer to get ready for the start of the school year.

“I’ve noticed a lot more positivity and they’re excited to be a part of this,” Smith said. “We’ve been working really hard on technique over the summer.”

Smith said she’d always wanted to be a dance director, so when the opportunity arose she jumped at the chance to return to PRC.

“I love being back for Friday nights and performing,” Smith said. “I’m really happy to extend the love to these girls.”

Smith and the squad are headed into uncharted territory, but she said that the community has rallied behind the program and lent its support.

That help has been noted and appreciated by the dancers, and Smith said it’s helped with the outlook of the program.

“It’s really great and makes the girls excited, they love being there to support the football team,” Smith said.

The program also offers opportunities that can positively affect the dancers later in life.

“We teach them to be genuine, kind people,” Smith said. “Being a part of the band means they can try out for college dance teams and get scholarship money.”

Not only can there be monetary benefits, but there are other ways in which the program can impact the young athletes.

“They make lifelong friends and it makes going to school more fun,” Smith said. “You’re also a major part of the community, which means the younger kids look up to you.”

Smith said it’s unfortunate that not every school has opportunities like that available to the students.

Due to that fact Smith said she just wants the athletes to have fun, and relish the experiences and memories they’ll make.

“I tell them to just enjoy it and have a positive attitude,” Smith said.

The Blue Brigade is looking forward to the upcoming year, and to what the program can accomplish in its first season.

However, that doesn’t mean Smith doesn’t have high expectations for the group, and she hopes they continue to improve as the year progresses.

“I would like for them to get ones at state, that’s one thing for sure,” Smith said.

“Overall, I just want them to have fun and enjoy this.”