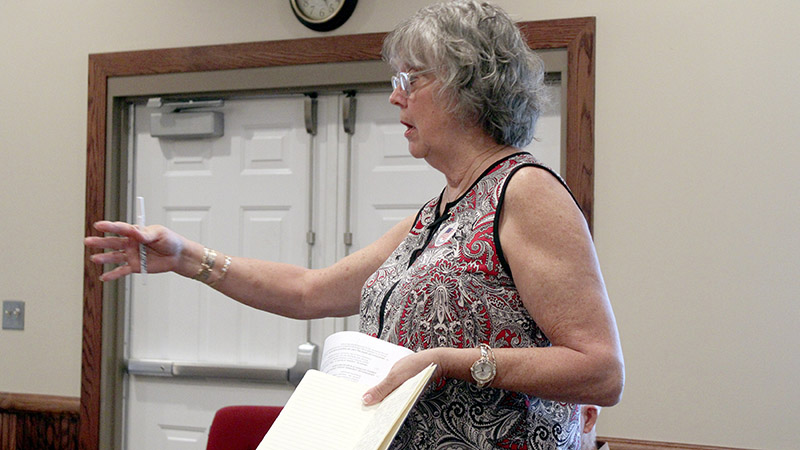 Margaret Ann Smith asks for the Board’s support in the creation of a Christmas Decorations Committee at the Board meeting Tuesday. Smith and Robert Applewhite told the Board they want to purchase Christmas decorations for the historic courthouse and expand decorations on Main Street and the PRCC campus. Photo by Cathy Cook.

Poplarville’s Board of Aldermen approved closing a job posting for a full time police officer during Tuesday’s meeting, because the proposed budget for 2019 to 2020 does not accommodate an additional full time officer, said Police Chief Greg Hartley.

Hartley informed the Board that dash cams for the police cruisers have been ordered. Alderman Russell Miller asked how the city could speed up the process of acquiring desktops for the police department, and City Clerk Jane O’Neal said she believes the city could purchase four units from the current year’s budget.

In a separate matter, Mayor Rossie Creel and Miller recused themselves during discussion of renewing the 2019 to 2020 Poplarville Special Municipal Separate School District’s Security Contract. The contract provides police officers as additional security at football games, said Hartley. Creel is the director of transportation and a school resource officer for the Poplarville School District and Miller’s wife is the assistant superintendent.

Shirley Wiltshire took over the meeting as Mayor pro tempore. However, that left the Board one member short of a quorum, so they could not vote on the issue. The Board tabled the issue until Alderman Tony Smith arrived at the meeting, at which point Creel and Miller again recused themselves. The Board voted to renew the contract.

—Authorized an application for a $45,910 Mississippi Homeland Security grant for 23 MSWIN radios for the fire department.

—Authorized advertising for part time firefighters at a pay rate of $10 an hour.