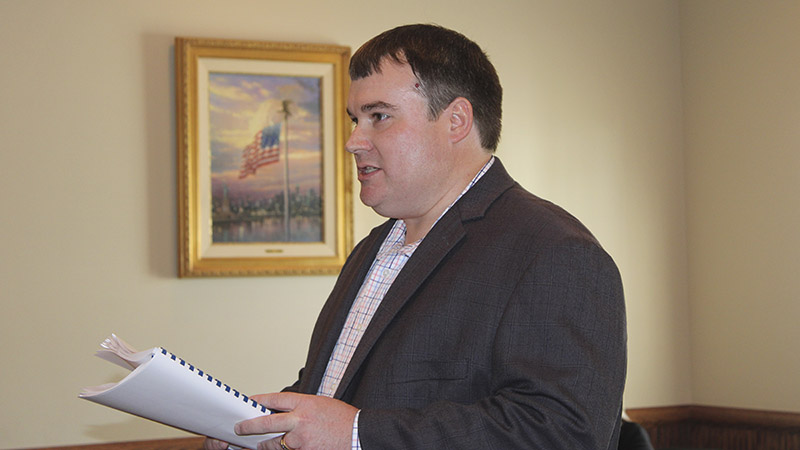 UNQUALIFIED OPINION: CPA Jabe Mills gives the Board of Aldermen a presentation concerning the results of an audit of the city’s 2017-2018 fiscal year during Tuesday’s meeting. Photo by Cathy Cook

Poplarville’s Board of Aldermen held a public hearing concerning the proposed 2019-2020 budget during Tuesday’s meeting.

In the preliminary budget, the millage rate will remain the same as the previous year at 54.5, said City Clerk Jane O’Neal. The proposed 2019-2020 budget includes $2.7 million in the general fund, $137,084 in the debt service fund for general obligation bonds, $40,886 in the debt service fund for TIF bonds, $10,883 in the police forfeiture fund, $1.2 million in the new capital projects fund for street repairs and drainage, $500,000 in the College Square TIF bond capital projects fund and $1.1 million in the water fund. The total proposed budget is $5.8 million.

In a separate matter, the Board heard a presentation about the 2017-2018 audit report from Jabe Mills of Topp, McWhorter, Harvey, PLLC. Mills said the audit found significantly fewer issues than the prior year. There were no material weaknesses identified, no significant deficiencies noted and no noncompliance issues noted, Mills said.

Mayor Rossie Creel said the audit is a “testament to the folks that run this city on a daily basis,” including the city’s department heads.

—Set a date for a final budget workshop for the 2019-2020 fiscal year on Wednesday, August 28, at 5 p.m., to allow reconsideration of some budget items for the public works department.

—Declared a Kubota ZD-326 mower as surplus and approved trading in the mower toward the purchase of a new one.

The next Board meeting will be September 3 at 5 p.m. in City Hall.

More than $36,000 found in search of Poplarville home