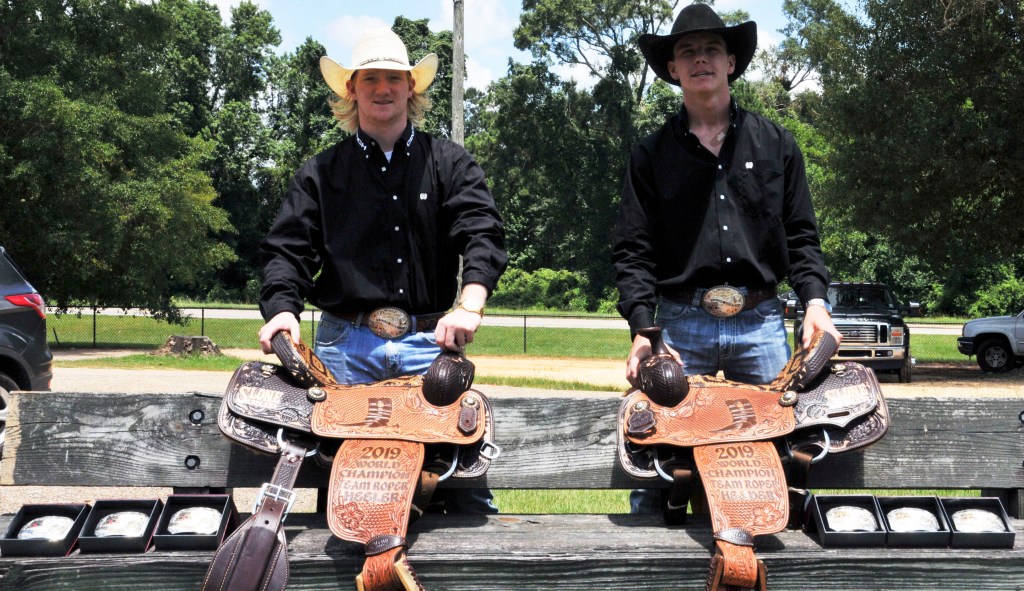 Jonathan Mitchell | Picayune Item To the victor goes the spoils: After being named national champions not only did Davis and Graves receive the black shirts, but they also were awarded new saddles and belt buckles to go along with their first place checks.

“Our dads were the last team to win state together as two freshmen,” Graves said.

Now the torch has been truly been passed on with Davis and Graves winning state championships as a duo in eighth, ninth and tenth grades before bringing home the national championship this year.

The 17-year-old athletes traveled across the United States to take part in multiple competitions before eventually being crowned national champions. From Aug. 14 to Aug. 20 the pair competed against over 40 other contestants at the National High School Rodeo Association Team Roping Finals in Rock Springs, Wyoming.

It was at that event they won their first team roping national championship.

Team roping is a two-person event that requires teamwork and precision.

The header is responsible for setting up the run, and then has to rope the steer around the head in three specific ways.

Once the header has the steer roped, the heeler can rope the steer’s legs.

Both hind legs must be caught otherwise it’s a five second penalty, and in a sport based on having the lowest time those five seconds can make a world of difference. The two ropers have been inseparable since birth, starting roping at just 4-years-old.

“It’s always been a sort of family affair, since we’ve been little we’ve just always been around it,” Davis said.

They first teamed up in eighth grade and went on to win state, a year before their fathers earned the title.

“There has come a point where I think we can outrope our dads,” Graves said.

“Oh I 100 percent agree with that, maybe in their primes they could outrope us, but now probably not,” Davis said.

After making it to nationals three consecutive years, they earned a national championship this past year.

“It was one of those things like ‘finally, we’re tired of waiting,’” Davis said.

“I said it only took us four years, but now we can finally put on the black shirts.”

Wearing those black shirts may not seem like a big deal to people outside the sport, but Davis and Graves understand the significance; only champions get to wear shirts of that hue. The hours the pair put in practicing has been a major factor in their success. Roping a steer takes a lot of teamwork and coordination, and to hone in on those things Graves and Davis really go to work in the practice pen.

“It’s essentially like putting experience into the practice pen to get better at that experience.”

Their friendship outside of roping allows them to perform better during a competition.

“We see a bunch of teams, and they can’t stand each other,” Davis said. “They don’t talk, they see each other at the rodeo and that’s it.”

Even if the duo at times doesn’t perform up to their own standards, they still won’t let that break their bond.

“We know that no matter what, win, lose, or draw, we’ll always be best friends,” Bryce Graves said.

These best friends look to accomplish even more during their senior year, aiming for a triple crown this upcoming year. After that, they’re not sure what the future holds, but they know that roping won’t ever go away.