Young golfer seeks to be one of the worlds best 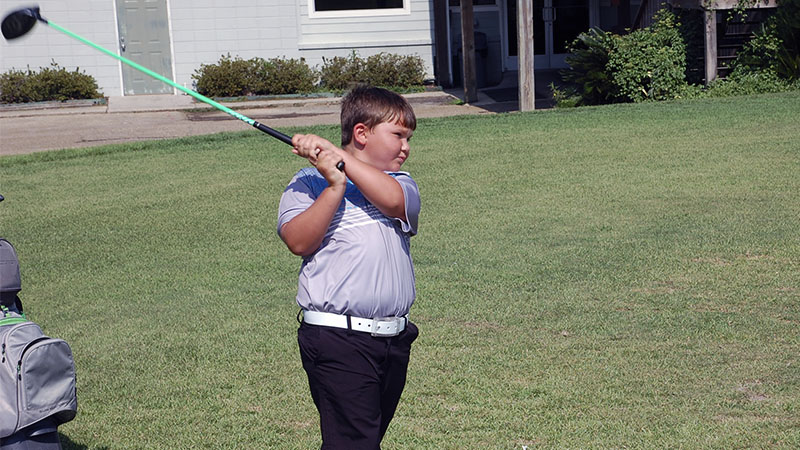 Jonathan Mitchell | Picayune Item Hands in the middle: Rowdy Foster and his family make the drive to Diamondhead, Mississippi multiple times a week to practice. Clayton Foster said Diamondhead has some of the best coaches in the nation.

Rowdy Foster picking up a golf club can be seen as almost happenstance.

After his older brother was injured while playing football, the family decided that golf would be a fun, new sport to try. The younger sibling attended a practice, and fell in love with golf.

Because his youngest son was already established as a football and baseball player Clayton Foster wasn’t sure how invested Rowdy Foster would be in the family’s newfound sport.

However, when it came time to sign back up for football and baseball, Rowdy Foster made an executive decision that left his dad in shock. He didn’t want to return to the sports he had played in the past, and instead wanted to focus on golf.  That focus has paid dividends, as now the 8-year-old athlete will compete with the best young golfers in the world at the Junior World’s Golf Tournament.

The event will be hosted in Pinehurst, North Carolina and will field a player base of nearly 1,600 athletes from 50 countries around the world.

Rowdy’s father said his son has only been playing since 2017, and he has to go up against athletes who have had a club in their hand since the age of 2. That inexperience hasn’t affected Rowdy Foster as much as some would’ve thought, and the unexpected success has left his father beaming.

“I’m just proud he even gets to participate on the world stage,” Clayton Foster said. “My family is super proud and excited for him.”

That excitement comes with some concern. Clayton Foster wants his son to be successful and have fun, but at the same time there’s a fine line to walk in order to not make his son despise the sport in which he’s become proficient.

“As a parent, it’s the hardest thing to deal with,” Clayton Foster said. “You don’t want to pressure him so hard that he hates the game.”

That balance has led to Clayton Foster making sure his son only participates in events he wants to take a part in, and the caring father only hopes for the best for his son in the future.

“My hope is that he loves the game in the future as much as he loves it now,” Clayton Foster said.

“It reminds me as parent to just enjoy the ride.”

Clayton Foster has seen serious growth in his son, not only on the course, but also in the way he approaches things in his everyday life.

“I think that he’s putting some of this in perspective, putting things together,” Clayton Foster said.  “Not everything is perfect. Him learning to deal with a good miss sometimes is important.”

In addition to the skills Rowdy Foster has gained on the course, he’s also become exceptionally close with some of his fellow golfers. His father likened it to adding members to their family, and he appreciates how welcoming everyone has been, especially Rowdy’s coach Hoppy Smith.

“People out here have come to embrace both of my boys like family,” Clayton Foster said. “They bend over backwards to help Rowdy, and some of them are borderline family. It’s really heartwarming.”