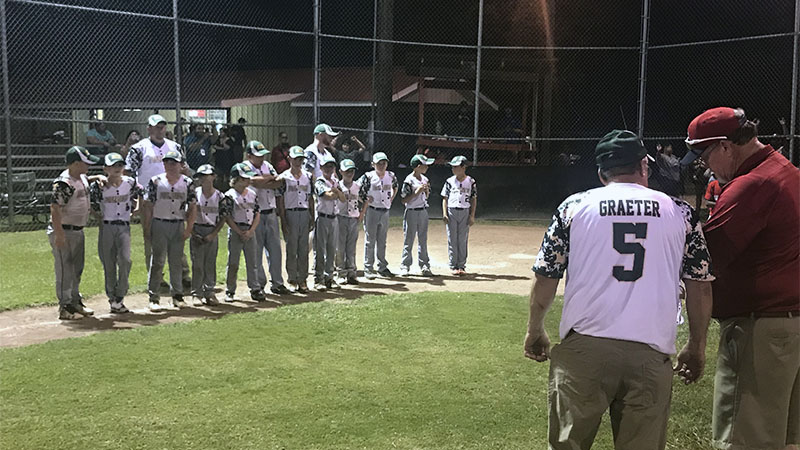 Coach Randy Graeter and his squad are headed to the Dixie Youth Baseball State Championship.

The games were origiannly scheduled to take place this past weekend, but were canceled because of tropical storm Barry.

The team is exceptionally young, and yet even as a 10-U team they’ve managed to earn a spot to play in the state final. The team is comprised of players from a variety of teams that were nominated by their respective coaches and then voted in as All-Stars. Graeter said that even with the group being made up of athletes from different teams, the players have come together as a unit.

“They really jelled as a team, and improved day to day,” Graeter said.

As impressive as their accomplishments on the diamond are, for Graeter and coaches Lance Pounds and Ben Pearson, this is about more than just baseball.

“Baseball should be secondary to teaching kids to do the right thing, and putting in that effort,” Graeter said.

“You’re not going to get anything out of it if you don’t give anything into it.”

The players are in a unique position at such a young age in that they’ll be representing the city of Poplarville as a whole when they play in the championship.

The added benefits of the boys playing well enough to earn their spot in the championship is that they get to travel. They see different towns, meet new people, and experience playing in other baseball parks as well.

Graeter said that for some, this trip might even be their vacation for the year. On top of the travel, Graeter said there are numerous benefits to playing baseball, or any team sport, at a young age.

The unpredictability of baseball means that the players need to know exactly what they’re going to do if a ball is hit their way. That preparedness and learning how to communicate with their teammates means that whatever obstacles they may encounter in life they’ll be able to overcome them.

“Baseball is game of thinking, you need know what you’re going to do when the ball is hit to you,” Graeter said. “And you don’t know in life what kind of ball will get thrown at you.”

For the coaching staff and Graeter, the value of the game goes beyond learning how to properly swing a bat or field a ground ball. The memories made during the trip will last a long time, and Graeter says that even in a game as big as a state championship the actual event takes a backseat.

“I hope they take this experience going to state and hold onto it,” Graeter said.

“The trip and camaraderie are just as important as the games.”