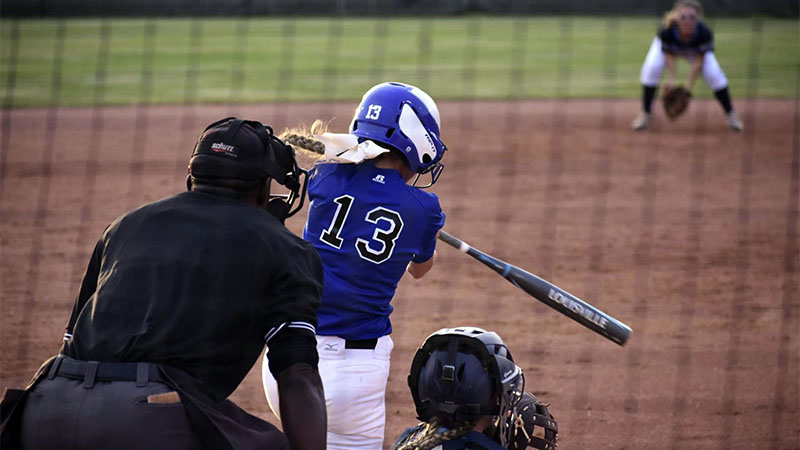 Submitted Photo Moonshot: Junior Madi Glidewell uses her power to smash a ball during recent action. Glidewell was the starting catcher and will be a key member of the squad as one of the few returning seniors.

High school softball athletes are restricted to only playing 12 games during the summer months.

Due to this constraint, Head Coach Tony Labella schedules as many games as he can fit in the month of June so that his athletes can recuperate during the month of July.

Still, Labella said multiple athletes play travel ball.These are independent clubs that compete across neighboring states against other top-tier teams. Labella said those extra reps could pay off by the start of the season. Additionally, Labella uses summer games as a way to evaluate his players and understand where they all fit within his system.

“While you try to see what you think will work, one of the things you figure out is what doesn’t work,” Labella said.

“You don’t want go into the first game and have something you don’t like because the season is so short you won’t be able to fix it.”

Right now, the evaluation process is key for Labella and his staff.

The team lost five seniors, and those positions will need to be filled with athletes who can perform.

“The good thing is we’ve gotten to the point that we may go up and down talent wise, but those who step up are expected to get it done,” Labella said.

That ability to get the win only comes with experience, and that’s what makes the summer months so valuable.

Labella said that at every school he’s coached he makes sure to have a comprehensive summer plan because not every athlete can take part in travel ball.

“Travel ball is good to play, but it is a time concern and financial concern for some,” Labella said.

“I’ve had chances to coach travel ball, but the focus is always with the high school team.”

Having that summer plan allows players to develop and work on their skills while not having to invest in the travel ball organizations.

It also helps that Labella’s system has been in place for seven years. Because of this the girls already understand their roles and expectations when they start.

There’s a fine line to walk for Labella and his staff however.

They want to schedule enough games to get the girls experience, but they don’t want to overwork the athletes.

“We don’t want to burn them out, but if you don’t develop over the summer you have no shot next year,” Labella said.

“The coaches even say it’s a lot, but everyone knows it’s an investment for the season.”

The work ethic of the Lady Blue Devils has Labella looking forward to the upcoming season.

Even in the games they’ve played over the summer, he’s already seeing progression.

“It’s neat to see the kids improve a lot because the kids work hard and because somebody isn’t going to be able to pick up the slack if they don’t perform,” Labella said.