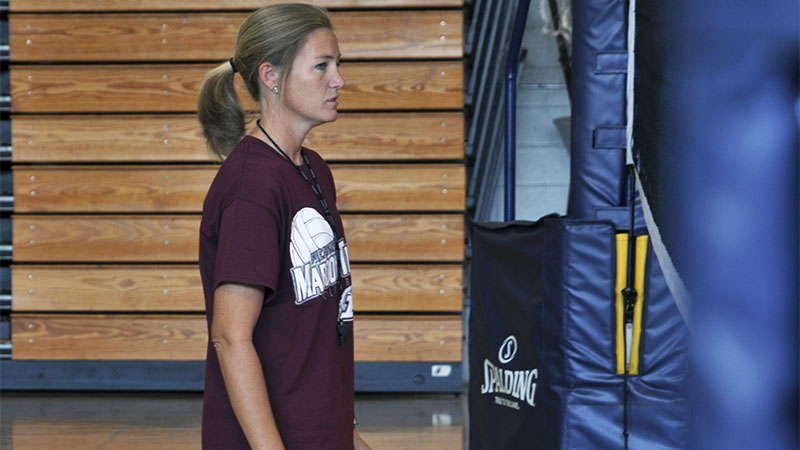 Jonathan Mitchell | Picayune Item Building a program: Head Coach Courtney Dickens looks on as her athletes go through a set and spike drill.

Courtney Dickens’ passion for volleyball comes from her family.

The sport runs in her blood with her parents hosting a coed volleyball league before she was born.

Still to this day the family is involved in the sport, getting together every week to play at Dickens’ grandmother’s house. The work ethic and dedication necessary to be successful in the sport comes from her upbringing.

The volleyball program at Picayune Memorial High School may have just been formed last year, but she brings those same expectations to the program she’s building.

“I’m all about working hard and being competitive,” Dickens said.

That drive led to her hosting practices every day through the months of June and July last year before the start of the team’s first season.

“At tryouts we couldn’t even get the ball over the net,” Dickens said.

“As far as being consistent, getting it over the net that was our biggest improvement.”

Dickens said that passing and serving are the two main components a volleyball team needs to be good at in order to win games.

“You have to serve it over to give yourself a chance,” Dickens said.

That’s why those two aspects have been worked on extensively during these summer months.

Dickens said that the help of her assistant coach and sister Hillary Dickens has really been valuable in getting the program up and running, even with the obstacles they faced during their inaugural season. The first season had its growing pains, but the experience gained from those games will be beneficial for the upcoming year.

“They see now what it takes to be good,” Dickens said.

“It helped them get better because they see now this is what we have to do and it encourages them to be in practice.”

The youth on the team is evident with the squad consisting of nearly a dozen seventh graders. There is no middle school program, so in order for the girls to get experience Dickens will have to put them up against ninth graders at the start of the season.

“I had set my mind that I’m going to keep younger kids,” Dickens said.

“That’s the only way I could figure out to start building this program.”

However, as she prepares to go into season two, there is a decent amount of leadership and experience available with the older girls.

“It’s so crazy how much better they’ve gotten and they encourage the younger kids now,” Dickens said.

“This way by the time the seventh graders are freshmen and sophomores they’ll be pretty good.”

Dickens said that the summer is when the players get better. During the season they’re busy planning for opposing teams, and so if a player wants to improve they have to put in the work now for the pay off later.

“If you’re not here someone else is getting better than you,” Dickens said. “They practice like they’re going to play.”

The program is still growing, and there were small goals set last year like scoring a certain number of points, winning a set, and then winning a game. With the squad returning nearly every player, Dickens has much higher expectations for the upcoming season.

“We’re going to have a sit down and we’re going to set our goals,” Dickens said. “And this year I’m hoping to get some more wins.”