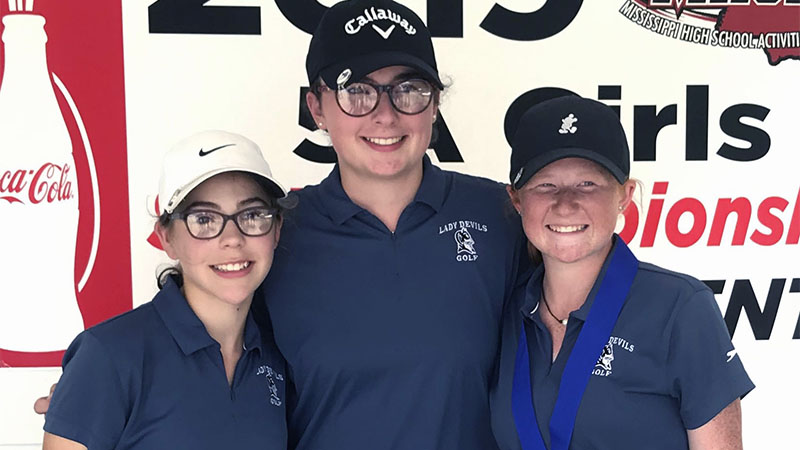 Submitted Photo All Smiles: From left, Grace Lanier, Sophia Albasini, and Kelsey Dill pose after coming in 3rd place as a team in the state golf tournament held in Laurel, Miss. Dill also was the 3rd place low medalist at the tournament.

Traversing an 18-hole course is difficult even for professional golfers, and the grind can be taxing as the day wears on.

However, for the girls golf team at PRC, the course was just an obstacle to overcome during the run to a 3rd place finish at the state tournament.

The team’s success is derived from a mixture of talent and hard work, and Head Coach Shelly Dill said that the girls really put in the time when it comes to their technique.

“Golf isn’t something you can pick up and put down,” Dill said.

“It’s intense, you have to practice a lot and keep going non stop.”

The dedication necessary to be successful on the course is something that Dill’s top athletes share.

Once practices start, the girls spend every day after school on the course, and with a season that lasts nearly four months, the girls can end up spending a lot of time on the course.

“They spend their life on the golf course, they’re dedicated to it,” Dill said.

“It’s amazing to watch these girls grow and see their eyes light up when they finally get the score they wanted.”

Even during the offseason, the team is putting in the hours on the course to better themselves and improve their scores.

“To be competitive and to do your best you have to practice all year,” Dill said.

That tireless work ethic benefitted the girls last year with three of them making it to state, and the team finishing 3rd. Dill said the state tournament is a tense venture, and just like the sport itself the event was filled with pressure for the athletes.

“A lot of people think that golf is boring, but it’s not, it’s interesting especially when you get into better brackets,” Dill said.

Dill said another aspect of the game that onlookers may not think about is the mental side of golf. The athletes are tasked not only with beating the other golfers, but must also overcome themselves to reach their full potential.

The girls rely on their coaches to help them through the season, and Dill said Assistant Coach Beverley Griffing was invaluable.

“Our girls love her,” Dill said.

“She helped me when I needed her the most, and she was there for all of us.”

Dill said that not only is golf a great competition to be a part of, but that the sport provides opportunities for athletes who don’t want to play football, baseball, or other “traditional” sports.

“To see their self esteem level come up and see them come out of their shells is incredible.”

Dill said the girls are currently working on their own, and attending summer tournaments. She hopes that they can have the same success next year, and keep the program growing in a positive direction.

Picayune striving for a state title