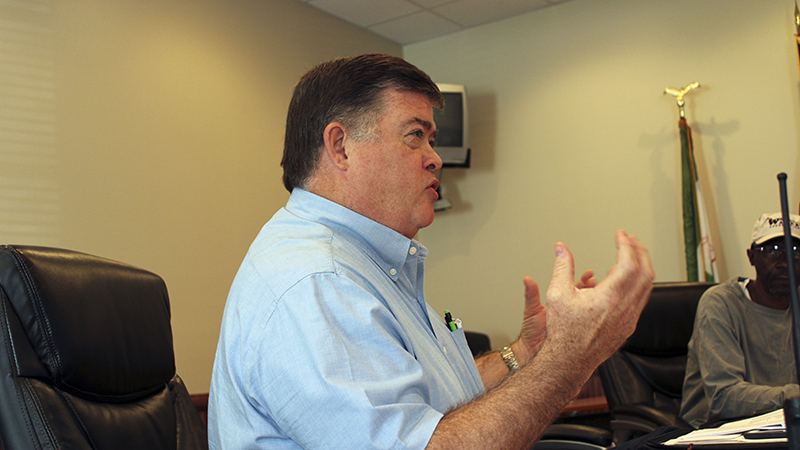 Police Chief Greg Hartley discusses the police department’s vehicles with Board members Thursday after the Poplarville Board of Aldermen special session adjourned. Some of the cost to replace police vehicles would come from drug forfeiture, Hartley said. Photo by Cathy Cook.

Poplarville’s Board of Aldermen declared a local emergency because of Tropical Storm Barry and discussed the 2019 to 2020 budget Thursday evening during a special called meeting.

Immediately after making the declaration, the Board adjourned the meeting because Alderwoman Anne Smith had to deal with a personal matter. Without Smith, the Board no longer had a quorum, so could not hold a meeting and make motions on official matters.

The remaining Board members, Kevin Tillman and Russell Miller and Mayor Rossie Creel, continued reviewing the 2019 to 2020 budget with the city officials in attendance after the meeting was adjourned.

Police Chief Greg Hartley said after reviewing the condition of police vehicles, the police department would like to start a replacement program for them. Three police cars also still need radar, which would cost the city $4,278.

Tillman said the Board has been begging for cameras to be installed in the police cars and suggested cameras be placed in all of the cars before new vehicles are purchased. The department does have cameras in some of the police cars, but Hartley said he did not have a list of the cars with cameras and could not say how many of those are in working order.

Tillman said body cameras for the city’s police officers should also be updated. Hartley said the department plans to update body cameras, but has not received a quote yet.

Miller, who has law enforcement experience, said he is concerned about officers working alone during night shifts. Hartley said hiring more part time officers will help prevent that from happening and that the Sheriff’s Department has been helpful in assisting the city when only one officer out at night.

Hartley said the police department is working to fill an open officer position and a sergeant’s position, and will be requesting a secretary position, because there has not been a secretary overseeing the bookkeeping and records management in the last couple of years.

Board members also discussed the high amount of overtime in the public works department and whether the department needs to hire an additional staff member. Miller said he frequently sees overgrown plants in ditches in the area.

Public Works Superintendent Sam Hale said Poplarville currently has more properties where overgrown trees hang down in the street than prior to 2005. Hale added that cutting overgrowth from trees is more time consuming than mowing grass.

Fire Chief Jonathan Head said the fire department plans to apply for a Department of Homeland Security grant in an attempt to acquire MISWIN radios. MISWIN is a digital radio system that works more like a cellphone than a traditional radio and the infrastructure for the system is maintained by the state, Head said.

Currently, the Poplarville Fire Department is the only agency in the county not operating on the system, Head said. While the fire department does have the ability to communicate with neighboring agencies like the sheriff’s department and police department, not using a standard channel can cause problems, Head said. This will be the department’s third time applying for the grant, Head said.