Picayune’s band more than just a half time show 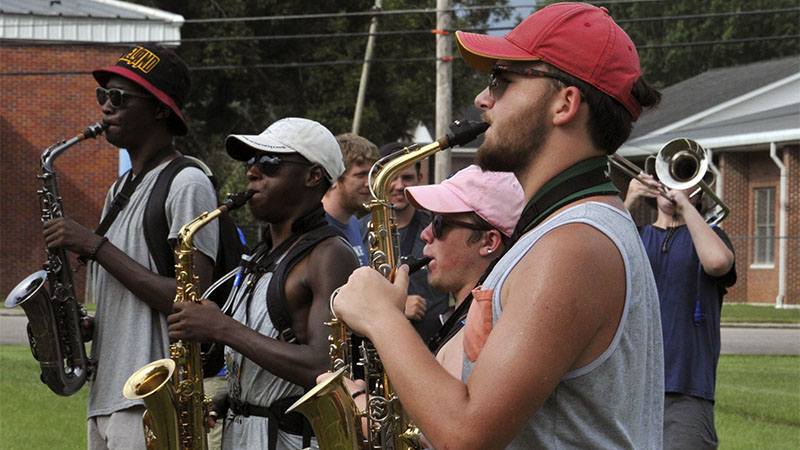 Jonathan Mitchell | Picayune Item Note for note: The Picayune Memorial High School band is currently in its formative state as the musicians learn the new music for the upcoming year.

Students carrying shiny instruments lined up in clean rows with little urging from the instructors as the Picayune Memorial High School band began one of many practice sessions held during the summer to ensure each halftime performance is on point.

The humidity meant the musicians were already perspiring as they started their warm up routine with Director Ellen Moore.

A variety of stretches and light cardio exercises got everyone’s blood flowing before they split into groups.

Each section seemed to go off by themselves, with each set of musicians having its own personality.

At this point the color guard then began leading the band members through a warm up as well, which included a variety of dances and light cardio exercises.

“A lot of freshmen when they first come in think they’re too cool for that,” Director John Cockrell said.

“After a couple practices though they really get into it.”

Once the warm ups were complete, a short water break allowed the musicians to rehydrate and prepare for the next portion of practice.

More than 100 students then took the field with their instruments and got into position.

The work they’re doing now is in preparation not only for the halftime show they’ll play at varsity football games, but also for competitions.

“This year we’re hoping to be in four competitions,” Cockrell said.

“One of them you have to be invited to depending on how well you perform at the competition before it.”

Picayune’s Maroon Tide Band has been successful the past couple of years in making it to the bigger competitions, but weren’t able to do well against opposition from larger schools.

This year, all of that will change.

“A lot of the bigger schools actually moved out of our group,” Cockrell said. “Now the playing field has sort of been leveled.”

The competition against other schools and within the band is important, but Cockrell wants the students to learn more than just how to read and perform music while marching in formation.

“It also makes them learn how to manage their time, and can help with discipline.”

The work ethic aspect is apparent with the musicians having to go through a two-week band camp starting at 8 a.m. and lasting until 4 p.m. every day.

Cockrell said that there are students who even stay after practice to get more training.

That dedication is what leads to the band’s success when competition season comes around.

To help the band build teamwork skills and increase each person’s fitness, the Marines organized a workout for them last week.

“It’s hot out here, and doing stuff like that allows us to keep going in practice,” Cockrell said.

That training and increased energy means that the students were more than willing to be vocal and honest about their performances during the practice.

While mistakes were made, everyone in the band was supportive of one another, and maintained a positive attitude about the mishaps.

“Some of these kids I’ve had since they were in 6th grade,” Cockrell said.

“They already know what I’m going to say before I say it, and we really just are a big family.”