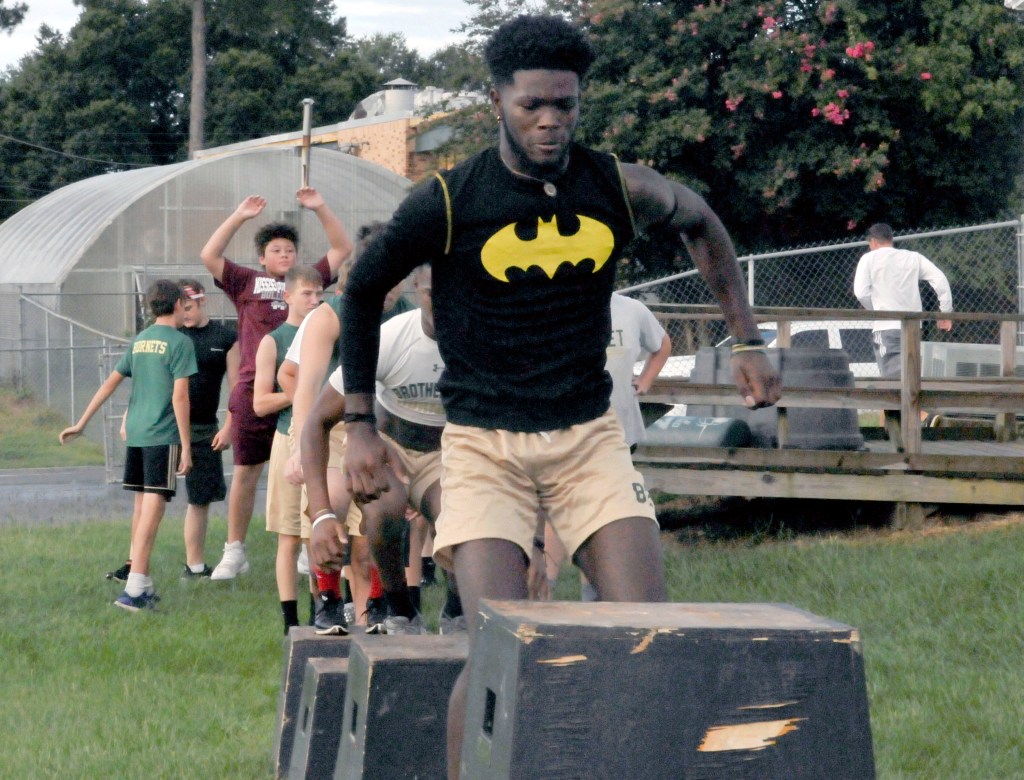 Jonathan Mitchell | Picayune Item Always getting better: Players do box jumps as part of a warm up before heading inside to do a weight lifting session.

The warm up started simple enough for Poplarville’s varsity football team as the sun began to break through the clouds.

The team went through a variety of activities to warm up.

This was all done under the watchful eye of Head Coach Jay Beech; his whistle signaling the start of each exercise.

After the players were warmed up, Beech split them into two groups.

One group went inside to begin with a cardio circuit, and the others stayed outside as the coaching staff prepared boxes, a ladder and some hurdles in the damp grass.

The outdoor activity was simple enough since athletes were tasked with jumping on top of the boxes, each one increasing in height. What would seem a routine activity became increasingly difficult with the height of each box changing, not to mention the slippery surface. Once that was complete the athletes moved to the ladder where they went through a variety of agility drills before taking on the hurdles.

At this point, the groups changed places, allowing those who had been outside some respite from the sun as they headed into the field house.

Then the process started all over again.

“These guys are preparing themselves, they’re not just showing up,” Beech said.

“They’ve been working since seventh grade on the field and in the weight room.”

When both groups had done all of the necessary exercises, they took a short break for water and for the guys to catch their breath. After the time was up Beech got the guys started on the next portion of the workout, weightlifting.

“The seniors have done a great job in the weight room and offseason conditioning program,” Beech said.

“It’s a really fun experience and we want to get back and try to win it all next year.”

What followed was a variety of lifts and weight circuits to improve strength and explosiveness. The players, ranging from middle schoolers to seniors, all went through the same process.

“The offseason program that Coach Beech has built is just second to none,” Offensive Coordinator Micah Hickman said.

“The offseason program as far as lifting and individual work that we run allows for a lot of reps.”

The slam of weights and triumphant yells echoed off the walls with the coaches counting every set.

Like a well-oiled machine whenever the whistle sounded, the players began their lifts.

“They get after it, you never have to question the effort,” Defensive Coordinator Timmy Story said.

The work being done now is in preparation for another state title run, and Beech said that expectation remains.

“We still feel like we have what it takes to a win a state championship and that’s our goal,” Beech said.

Young anglers learn how to push through rough conditions