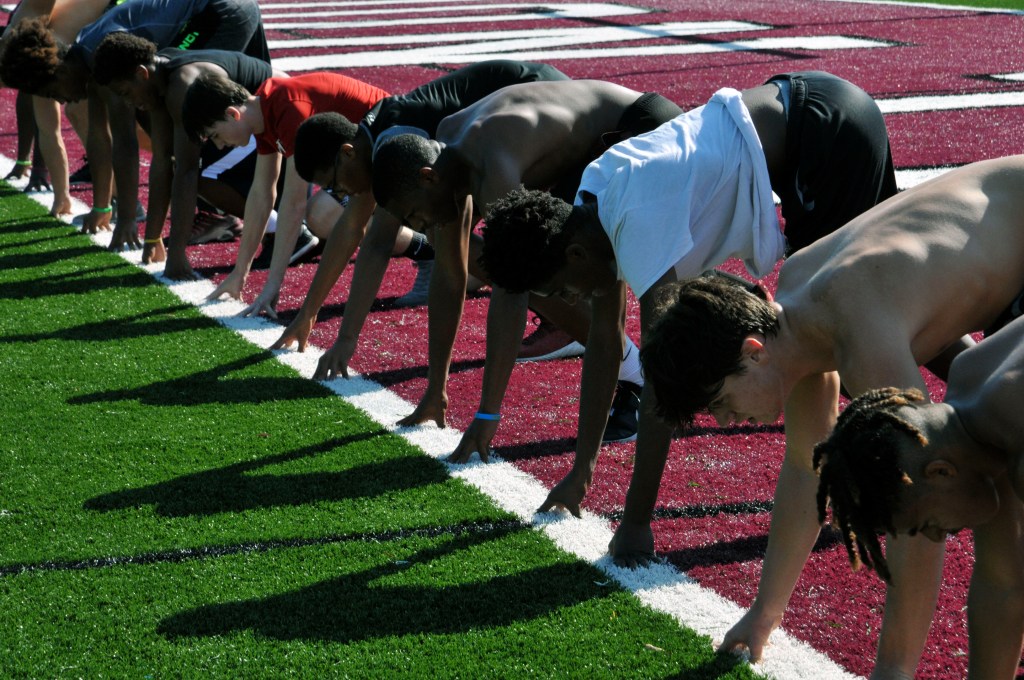 Jonathan Mitchell | Picayune Item Push Through: After their weigh room session athletes went outside and ran a variety of sprints before the workout was completed

This sort of offensive set up is great at keeping possession of the ball and running down the clock.

All that time with the ball can demoralize the opposing defense, not to mention tire them out.

Offensive Coordinator Cody Stogner said that in this kind of system, the big guys on the line could win or lose a game.

“Last year we leaned on the offensive line, and we got a couple of them back,” Stogner said.

“Making sure we know who to block, what hole to hit, what to look for when making cuts, it all comes down to the guys up front.”

Football players who begin playing in junior high are exposed to that play style so they are used to the system by the time they reach the varsity level.

This allows the athletes to enter the high school level with in-depth knowledge of the system, which makes the transition easier.

That means when the time comes that a player has to be replaced, the next man up will understand the system, their role in the system and the coaches’ expectations.

Those expectations are to outwork the opponent.

The Maroon Tide’s system doesn’t spread the offense on the field.

Stogner said the team’s offensive success in the past is what makes athletes buy into the system.

“Everybody wants to be on the field, and to do that you have to do what coach asks you to do,” Stogner said.

“We’re not having to fight tooth and nail to get kids to buy in because they know it works.”

Additionally, the system as a whole requires the players to conquer adversity in a variety of ways.

If a certain running play doesn’t work, they have to adapt and overcome.

“You’re teaching kids that are in tough situations and making them deal with stuff they’re not used to,” Stogner said.

Learning how to deal with adversity is just one of the lessons the coaching staff teaches the athletes. It’s a skill that they can take with them through life.

“That’s what we’re in it to do, to make good players and good people,” Stogner said.

Stogner said the offseason is all about improving the players, which will pay dividends later in the year.

“It all means something in the end, especially when you win a state championship,” Stogner said.

“You can look back and say it was all for this.”

Winning a state championship may seem like a lofty goal, but for an established program like the Maroon Tide, those expectations are the same every year.

“We want to win every game we play,” Stogner said.

“From an offensive standpoint, I want to be the best offensive line in state and to do that we need to lead state in rushing.”